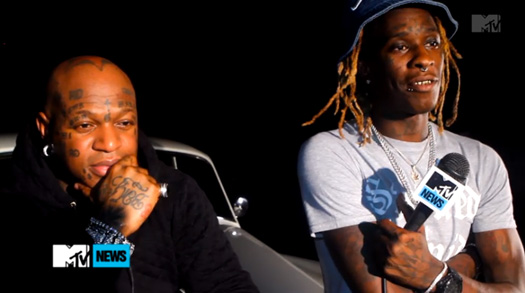 If you remember back in March and May, Young Thug mentioned that he will be calling his debut studio album Tha Carter VI after Lil Wayne had previously said he would be stopping his Tha Carter album series after the fifth installment.

In a recent interview with MTV on set of a new Rich Gang video shoot in Atlanta, Thugger gets asked if he still plans on naming his album Tha Carter VI and he says that he is not sure now because Weezy may be dropping more albums. However if Tune does stop at C5, then Thug will drop C6 all the way up to a C10 project.

You can watch MTV interview Young Thug with Birdman sitting next to him in the clip below. I really want to know what Wayne thinks of this haha!

“I dunno, cause Wayne’s coming out with more albums. I don’t know if he’s gonna name one of them Carter VI. It depends on what he names his album.”