Lil Wayne Reunites With Juvenile & Mannie Fresh In New Orleans, Performs “Rollin'” & “Back That Azz Up”

On April 5th for a stop on his “Release Partiez” tour, Lil Wayne made an appearance at Hyatt Regency New Orleans in Louisiana. Weezy was reunited at the event with Mannie Fresh and Juvenile.

During his appearance, Tunechi also got on the mic and performed “Rollin’“, “Coco“, “Fingers Hurting“, and “Back That Azz Up” live with Juvie and Mannie, which was dope to see.

You can watch footage from the Cash Money Millionaires reunion after the jump below!

END_OF_DOCUMENT_TOKEN_TO_BE_REPLACED 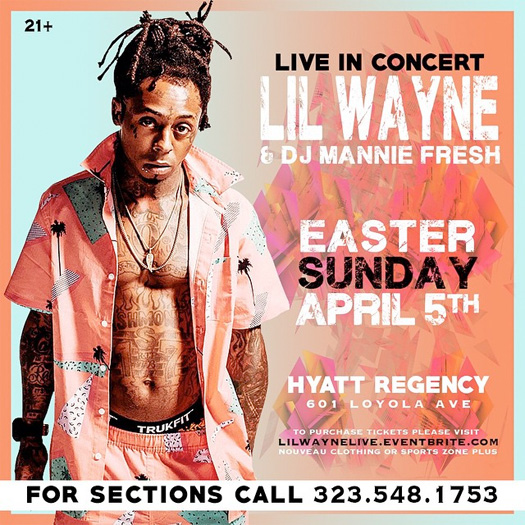 This Easter on April 5th, Lil Wayne will be hosting another Sorry 4 The Wait 2 mixtape release party! The event will take place at Hyatt Regency New Orleans in Louisiana.

Joining Weezy at the hotel will be Mannie Fresh, so it will be good to see them both together in their hometown. If you wish to attend the party, you can order your tickets online here.

Tunechi will also be hosting Sorry 4 The Wait 2 mixtape events at BLVD Nights in Kansas City on March 13th, at The Complex in St. Louis on March 14th, and at Kress Live in Biloxi on April 4th.