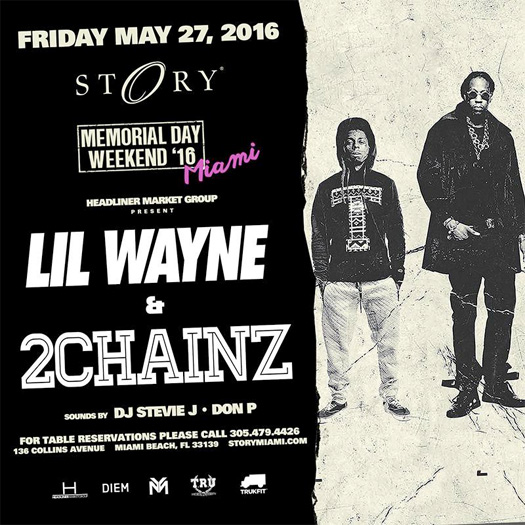 The DJs on the evening will be Stevie J and Don P. There is no word just yet on if Weezy and Tity Boi will perform any of their collaborations live together.

If you wish to attend STORY Nightclub later today to see the ColleGrove duo, you can buy your tickets online here for $75.00!

Here is the official music video for French Montana‘s “Pop That” single featuring Lil Wayne, Drake and Rick Ross. The visual was shot in Miami, Florida on May 27th and the song will appear on Montana‘s upcoming Excuse My French album, which will be released at the end of this year.

Updated with the video with the official VEVO version!

Lil Wayne will release the first single from his forthcoming I Am Not A Human Being II album tomorrow (June 1st), which is called “My Homies Still” and features Big Sean. The crazy thing about this collaboration, especially the song title, is that Weezy and Sean‘s G.O.O.D Music label-mate Pusha T currently have beef. Anyways, you can check out the single cover above and don’t forget to visit LilWayneHQ.com tomorrow to listen to the record!

After the jump, you can watch some more behind the scenes footage from French Montana’s “Pop That” video shoot featuring Tunechi, Drake and Rick Ross.

END_OF_DOCUMENT_TOKEN_TO_BE_REPLACED

Above, you can watch some behind the scenes footage from French Montana‘s “Pop That” video shoot, which took place in Miami yesterday. In the clip, you can hear Lil Wayne‘s verse, as well as watch him skate and shoot his parts for Montana‘s forthcoming single. Also featured on the song that will drop any night this week is Drake and Rick Ross.

“Bitch, stop talking that shit and suck a nigga dick for some Trukfit.”

Click here to view some behind the scenes photos and listen to a preview of Drake‘s verse from the video shoot!

Here are some photos of Lil Wayne sitting courtside at the Miami Heat vs. Dallas Mavericks game yesterday (June 2) at the American Airlines Arena in Miami, Florida. I find it funny how Weezy keeps rocking Lakers clothing at these Heat games haha.

You can view some more pics after the jump, along with some pictures of Tune and Drake celebrating Memorial Day Weekend at club LIV on May 27.