In the video above, you can watch some footage of Lil Wayne performing “Hello” and “Bitches Love Me” live at Paris Hilton‘s 32nd birthday party. The birthday bash took place at Paris‘ crib in Los Angeles, California on March 2nd.

Click here to view a few photos of Weezy F Baby at the party!

During their interview, Paris discussed what it is like working with Lil Wayne, how intelligent he is, and more. Read what she said about Weezy F Baby below:

END_OF_DOCUMENT_TOKEN_TO_BE_REPLACED 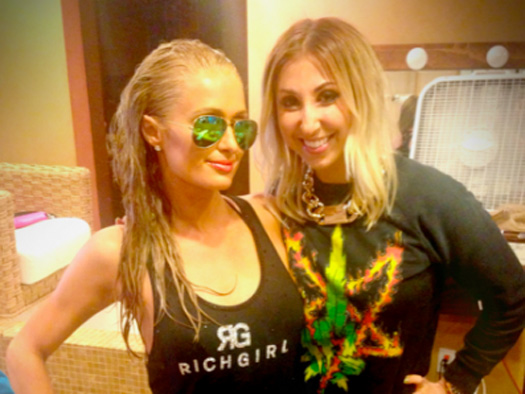 All this week, Cash Money‘s latest signee Paris Hilton has been shooting a music video for her debut single on the label called “Good Time” featuring Lil Wayne.

The video shoot took place in Los Angeles, California and the director of the visual is Hannah Lux Davis, who has previously done the “Bitches Love Me” and “Tapout” music videos.

According to Birdman, the “Good Time” single will premiere in two weeks time. There is no behind the scenes photos or footage from the video shoot just yet, except for the pic above of Paris and Hannah.

You will be able to find this song on YMCMB‘s upcoming compilation album, Rich Gang: Flashy Lifestyle, due to be released on June 25th. Click here to watch some behind the scenes footage and here to view some photos from on set of the “Tapout” video shoot!

Above, you can watch some behind the scenes footage from Birdman‘s “Tapout” video shoot featuring Lil Wayne, Future, Mack Maine, Nicki Minaj, and Detail.

Click here to check out some photos from on set of the “Tapout” video shoot!