During this past week, Lil Wayne and Young Money‘s Cory Gunz, Euro, Flow, Gudda Gudda, Hood, Lil Twist and Mack Maine, as well as DJ E-Feezy, all got together for a mystery shoot at a skate park on February 11th.

It has now been confirmed that Weezy and his YM artists were taking part in an interview and a cypher with Karen Civil‘s “Civil TV”. There is currently no date as to when this interview and cypher will be released, but hopefully it’s soon.

You can view some more photos from this secret shoot after the jump below. This should be interesting!

END_OF_DOCUMENT_TOKEN_TO_BE_REPLACED 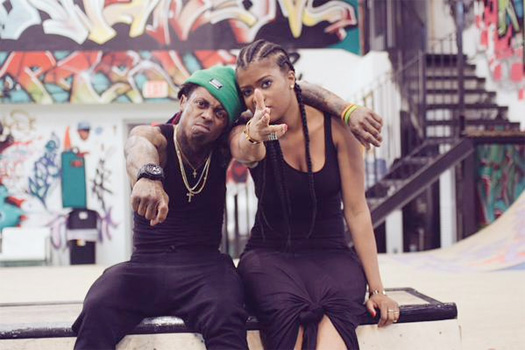 It looks like we can be expecting something new from Lil Wayne, Young Money, and Karen Civil soon!

Karen posted up a few photos (see them below) of her on set of a mystery shoot with Weezy at a skate park yesterday.

Wayniacs what do you think they were filming?

END_OF_DOCUMENT_TOKEN_TO_BE_REPLACED

In the video above, you can watch episode 4 of Lil Wayne‘s “DEWeezy” series that shows him arriving in style to South Africa and skating in Australia. This clip shows how hard Weezy works as he travels from the studio to the stage to the skatepark, as well as adding the audio from some of Wayne‘s interviews where he talks about how hard he works and why it is important. Click here to watch episode 3.

In related news, you can watch 3 rough cuts of Tunechi‘s “DEWeezy” commercial after the jump below that will be shown on TV to advertise Mountain Dew. The advert is being directed by Chris Robinson and if you missed when I posted some photos from the video shoot, click here to check them out!

END_OF_DOCUMENT_TOKEN_TO_BE_REPLACED

Check out episode 2 of Lil Wayne‘s “DEWeezy” series above were you can view footage of him skating and talking about why he loves his lifestyle so much. You can also watch episode 1 after the jump that includes Paul Rodriguez introducing the Mountain Dew skateboard team and then they all go watching Weezy at his SXSW concert in Austin, Texas on March 15th.

I wasn’t going to post these videos on the blog, because episode 1 doesn’t include any new footage of Wayne, but episode 2 does. So it looks like I’ll be posting each episode on this site from now on and episode 3, which will be released next week, includes Tune showing off his injuries from skating.

Also after the jump, you can view some photos of Tunechi shooting a commercial for “DEWeezy” that is being directed by Chris Robinson.

END_OF_DOCUMENT_TOKEN_TO_BE_REPLACED

Birdman recently spoke with XXL about shooting a movie this fall with the entire YMCMB gang, which will launch on Cash Money Films. Baby and Slim have already setup Cash Money Records for music, Cash Money Content for books and now they are in the process of setting up Cash Money Films for movies! The #1 Stunna really is racking up that mula!!

The movie will be called Rich Gang and Lil Wayne will be center of it. Birdman has said the film will be like a 2012 version of Cash Money Millionaires’ Baller Blockin’ movie, which was released back in 2000. The Young Money and Cash Money artists won’t have to go to acting school though as Baby wants them all to be themselves.

Check out Birdman‘s interview talking about the Rich Gang movie below: