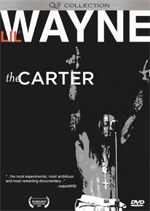 The Carter is a documentary on Lil Wayne, which was released in 2009 and includes footage from his interviews, concerts, tattoo sessions, studio sessions, photo shoots, on his tour bus, chilling with his homies, and more.

It was directed by Adam Bhala Lough and was shot in the period shortly before and just after Wayne‘s Tha Carter III album was released.

This documentary is a must-watch for any Lil Wayne fan! You also get to see an in-depth look into Weezy‘s private life and check out personal moments and highlights from his music career.

Watch some clips from The Carter below:

First 10 minutes of The Carter Documentary.

Lil Wayne performs “Demolition Freestyle Part 1” for the camera – from The Carter Documentary.

Lil Wayne recording “Magic” in a studio booth – from The Carter Documentary.