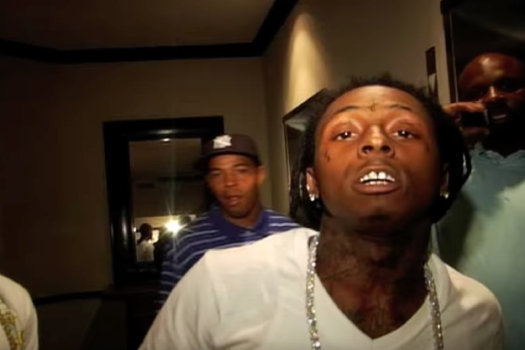 END_OF_DOCUMENT_TOKEN_TO_BE_REPLACED

Soulja Boy was a recent guest on Gillie Da King and Wallo267‘s “The Million Dollaz Worth Of Game” podcast.

During their interview, Young Draco was asked who his top 10 rappers of all time were to which he named Lil Wayne in the fourth spot:

You can watch SB name his top 10 rappers in the clip after the jump below! What are your thoughts on his list?

END_OF_DOCUMENT_TOKEN_TO_BE_REPLACED

At the 6:45 mark of their conversation, Russ revealed he “grew up on ’07 Lil Wayne” before later on mentioning “Wayne is up there for sure” when asked who his GOATs are at 9:25.

After saying he originally got interested in rap from Eminem and 50 Cent, the Atlanta resident rapper goes on to say he then got into Weezy‘s music and remembers being in high school when “A Milli” first dropped. You can check out the full convo below!

END_OF_DOCUMENT_TOKEN_TO_BE_REPLACED

While promoting his Branson cognac across the country, 50 Cent participated in an interview on Instagram and mentioned what he thinks the next VERZUZ battle should be.

Fiddy said during his conversation that he believes good opponents for both Lil Wayne and Drake in a VERZUZ battle would be none other than each other.

“I think because of the momentum, the best thing would probably be Lil Wayne vs. Drake… being real with you because it’s two styles, two different styles in the same period, so it will be entertaining enough to watch both of them.”

You can watch 50 explain his reasons why Weezy vs. Drizzy would be a good battle in the video below! Would you like to see this happen?