END_OF_DOCUMENT_TOKEN_TO_BE_REPLACED

“I’m so excited I plan to drop a single in January,” said Khaled. “Of course, I’ma be rocking with Weezy, that’s my brother, as soon as he gets a chance in his schedule for us to get in the lab, I’ma be there and I’mma be there for him.”

“It’s one big family, YM/CMB, We the Best. Shout to Slim, Birdman, Mack Maine and Lil Wayne for letting me a part of a incredible family, incredible team,” Khaled said.

Above, Sway from MTV speaks to DJ Khaled about working on his upcoming album that is dropping in 2011 on Cash Money Records, and says Weezy will be on the LP. After the jump, you can watch a video of some celebrities including: Russell Simmons, Ciara, Twista, Cee-Lo, Big Sean, Jim Jones, Donnis, Ed Lover, David Banner, Jazmine Sullivan, Bow Wow, Saigon and more welcoming Lil Wayne home.

END_OF_DOCUMENT_TOKEN_TO_BE_REPLACED 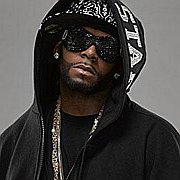 “First of all, I did Lil Wayne, Young Money ‘Every Girl.’ When I heard that track, I was like, ‘Ah, man, this is what I’m up against when I come back out? I gotta conquer this first. I gotta conquer this before I put out my album.’ This is like my homework before I can go out and play. So when I heard ‘Every Girl,’ I’mma keep it real just like them: When I heard the verses and the hooks, I was like, ‘This is so crazy.’ I wanted to put my two cents in.”

Shout outs to MTV and I really can’t see R. Kelly getting anywhere near the level Weezy is on 😆