END_OF_DOCUMENT_TOKEN_TO_BE_REPLACED

A couple of days ago on July 8th, The Game held an album release party for his upcoming Drillmatic album at The Novo music venue in Los Angeles, California.

During his show, Game brought out Lil Wayne to perform “My Life“, “Steady Mobbin’“, and “A Milli” live for everyone in attendance. He also brought out Kanye West, Kurupt, DJ Quik, Suga Free, O.T. Genasis, Blueface, RJ, Symba, and more.

You can check out some footage of the Compton rapper and the New Orleans rapper performing these 3 songs together live after the jump below! Don’t forget that Wayne will also be featured on Game‘s forthcoming album, Drillmatic!

END_OF_DOCUMENT_TOKEN_TO_BE_REPLACED

Pictures & Videos Of Lil Wayne In Noblesville, IN Last Night 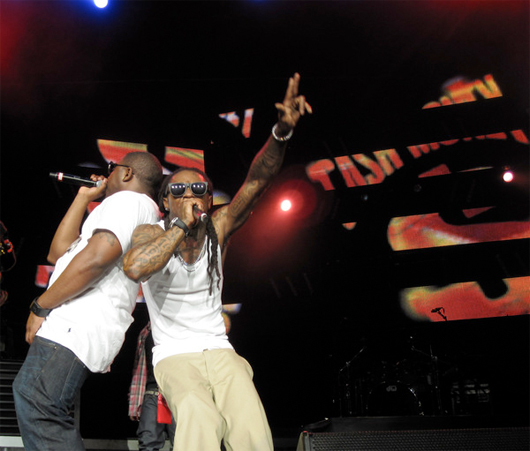 Check out all these pictures and videos of Lil Wayne on the America’s Most Wanted tour last night (8/28/09) courtesy of the beautiful Brenda. The concert was held in Noblesville, IN and everything below is high quality. Hit the jump to see more!