Tag Archives: take it to the head 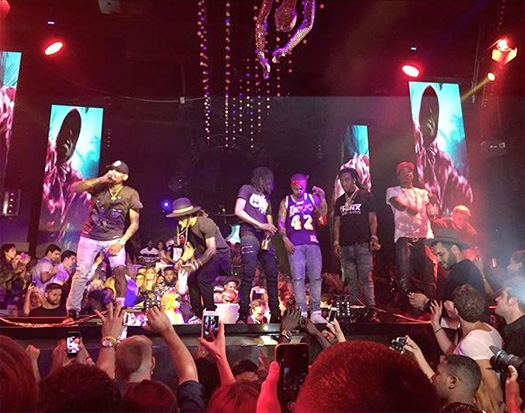 On September 3rd after Chris Brown brought out Lil Wayne during his “One Hell Of A Nite Tour” show at the American Airlines Arena in Florida, they both attended STORY Nightclub in Miami for an after-party.

During their appearance, Weezy and Breezy got on the podium (Migos joined them too) to perform “How Many Times“, “Loyal“, “Take It To The Head“, “Back That Azz Up“, and more songs live for the people in attendance.

You can watch a video from the after-party after the jump below!

END_OF_DOCUMENT_TOKEN_TO_BE_REPLACED

Nicki Minaj Brings Out Lil Wayne To Perform “Take It To The Head”, “Pop That” & “Always Strapped” [Videos]

In the video above, you can watch some front row footage of Nicki Minaj bringing out Lil Wayne and DJ Khaled to perform “Take It To The Head” live in Miami, Florida at the James L. Knight Center on July 24th. Click here to view 15 photos of Weezy performing with Nicki at the concert!

After the jump, you can view more footage of Tunechi performing his verse from “Take It To The Head“, French Montana’s “Pop That” single, and then the Barbie brings out Birdman and Mack Maine for them all to perform “Always Strapped“. It was hilarious when Tune was asking Nicki if that fan that ran on stage was her baby daddy 😆

END_OF_DOCUMENT_TOKEN_TO_BE_REPLACED

Here is the official music video for DJ Khaled‘s “Take It To The Head” single featuring Lil Wayne, Chris Brown, Rick Ross and Nicki Minaj. The visual, which was shot in Los Angeles, was directed by Colin Tilley and the song will appear on Khaled‘s forthcoming Kiss The Ring album, due out in the summer. Cameos can be seen from YMCMB‘s Birdman, Drake, Mack Maine and Busta Rhymes.

Click here to view some behind the scenes footage from the video shoot!

After shooting his parts for his cameo in the “Take It To The Head” music video in L.A., Birdman spoke with Sway from MTV about Lil Wayne signing a new four-album deal with Cash Money Records and what Tunechi is to YMCMB. Baby says that the type of deal they agreed on has never been done in urban music before and it is probably the biggest deal ever in urban music! Even though the #1 Stunna wouldn’t confirm the exact figures in the new contract, rumors have circulated online that it was for around $150 million 😮

“YMCMB start and stop with Wayne; it ain’t no YMCMB without Wayne. The type of situation we did never been done in urban music; it’s probably the biggest deal ever in urban music. I’m blessed to even do that – whatever my son want, he can get. It’s all his anyway, so it don’t really matter to me. That’s one of our goals, and the move we just made was a big move to that, to make sure the pioneer of it, which is Wayne.”

After the jump, you can watch some more footage of 2 Chainz and Weezy performing at King Of Diamonds in Miami last week. They both performed “Duffle Bag Boy” and then Tune rocks out to Tity Boi performing his own records such as “Spend It“.