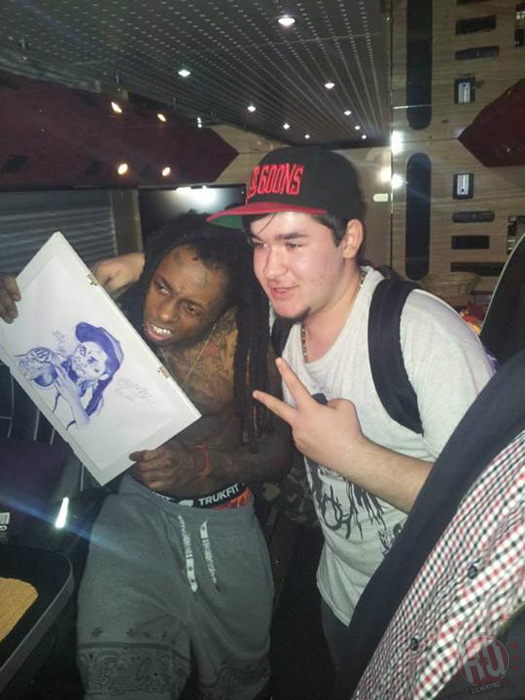 END_OF_DOCUMENT_TOKEN_TO_BE_REPLACED

There have been reports all over the net recently saying Lil Wayne‘s visa has been denied from countries in Europe, because of his criminal record, but a rep for Tunechi has said they are untrue. This means that it is still possible Weezy will be touring in Europe this summer. Check out what Wayne‘s rep told XXL below:

This is great news for us fans in Europe, and I’ll be for sure going to watch Tune live this summer if he is allowed in the UK!

While having dinner, Lil Wayne announces Cory Gunz as the next member to be signed to the Young Money team in the video above. If you remember back, the very first “A Milli” that got released had Cory Gunz featured on it. Leave a comment below with your thoughts on this, like do you think it was a good move or not ❓

Hit the jump to see Lil Wayne and his Twap Team (Lil Za and Lil Twist) do a freestyle live on uStream in his mansion. Weezy also plays the piano and has a “Fuck Em!” carpet underneath it which was pretty cool. You can also see part two of Tim Westwood’s interview with Birdman on Baby‘s tour bus.

END_OF_DOCUMENT_TOKEN_TO_BE_REPLACED

Here is day 5 of the Cash Money and Young Money Europe tour where they are in London, UK. This is the last day in the UK, and day 6 they will be in Paris which will be posted on Wednesday. Birdman‘s fam do a bit of car shopping and then Mack Maine and Gudda Gudda speak to Derick, before you see Weezy and Birdman perform on stage.

Here is day 4 of the Cash Money and Young Money Europe tour where they are still in London, UK. Birdman does a few interviews, and then the Cash Money family go around London at night. You also see two music videos: Birdman‘s “Written On Her” with Jay Sean, and Jay Sean‘s “Down” with Lil Wayne.