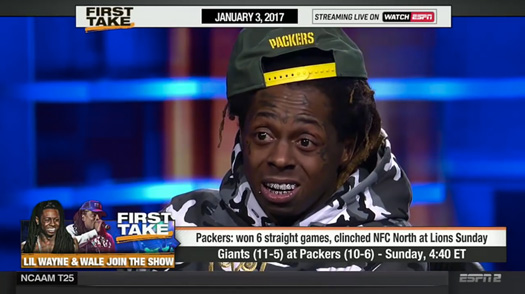 Straight after debuting their “Running Back” collaboration live on “First Take” earlier this month, Lil Wayne and Wale sat down with Stephen A. Smith, Max Kellerman and Molly Qerim for an interview on the ESPN show.

You can check out Weezy and Wale‘s full sit-down interview on ESPN’s “First Take” in a video after the jump below!

END_OF_DOCUMENT_TOKEN_TO_BE_REPLACED

Lil Wayne blogs for the second time from Riker’s Island, and this time Wayne‘s letter is about Donovan McNabb going to the Washington Redskins. You can read Weezy‘s blog below, and he also tells us his top five NFL Draft picks:

I think this will be a great thing for all involved, except the Eagles. One reason is because I don’t think Andy Reid was ready to part ways with the soon to be 34 year old veteran. He still had a year left on paper with the Eagles, And though I don’t think they would’ve given him an extension, for some reason I think Andy would’ve liked to see Donovan play it out. Although Reid put the word out that he was entertaining offers a few weeks ago to the coaches and GM’s. I don’t think he was the brains behind that move. i think this was above him. Another reason is because of where he eneded up. Why send him to Washington? Now he gets to play the eagles twice. I’m sure he has those days marked already. The other reason is the Eagles don’t have sufficient QB to fufill the role. I mean the 2nd round pick, Kevin Kolb, and Michael Vick doesn’t exactly fit the bill if you ask me. Philly is a hard place to play and an even harder place to play for. My sympathy gees out to Kolb and Vick, who will be expected to do nothing other than win.

Now McNabb is headed to the great QB coaching of Shanahan. This will be great! He’s still a prime QB, despite the fact that he hasn’t played a full season all but once in the last six. He’s a post season shoe in. I’m glad he didn’t end up with the Raiders. He wouldn’t have a shot! I’m calling this the craziest QB trade since Brett to the Vikings.

Congrads to Duke & Coach K, as well as UCONN women and gents. I think both of those guys need new day jobs. More complicated ones. NBA, WNBA!

You can read Tunechi‘s first blog here, and you can watch Tiny’s and Toya’s first episode from the second season of their reality TV show after he jump: