I was just reading through the LilWayneHQ forums, and I found a really interesting story posted by DatShyt about a recently released inmate from Rikers Island talking about Weezy‘s life in prison. You can read the full story below, and I am sure you will all find it interesting too!

Since I’ve been locked up until now, one of the main things I constantly get asked about is Lil Wayne, who was incarcerated at Rikers Island at the same time I was. During my stay at Rikers Island, I was placed in General Population at the E.M.T.C. (C-76 aka “6 Building”) where all male sentenced inmates are held. I would spend most of my time working, drawing, watching bootleg DVDs, and listening to the radio. Inmates would get paid $10-$25 a week for various jobs around the jail. For a few months of my time I worked; not for the money as much but to help pass the time. My job on the Island was to rinse and scrub pots in the mess hall as well as deliver the dinner food wagons with my friend and fellow inmate Geoff Turbeville to Protective Custody (“P.C.” – 3 Upper), Administrative Segregation (“AdSeg” – 2 Upper), New Admission Cells & C.A.T Cells (Cells for New Inmates and Inmates who had Assaulted Staff -2 & 3 Main), and Mental Observation Dorm (“M.O.” – 1 Main).

Contrary to what was written in most newspapers Dwayne “Lil Wayne” Carter was housed in Protective Custody Cells. This is where the jail would house some Snitches, Homosexuals, Child Molesters, Incarcerated Cops, former Correctional Officers, and occasionally High-Profile Cases. Basically anyone who would or have had a problem in general population.

These Inmates were not allowed to leave their respective housing areas to go to the mess hall, so we would have bring the meals to them. While doing this I would sometimes see humorous stuff. One time I witnessed an inmate who worked as a pantry worker in 2 & 3 Upper throw a loaf of bread through a food port in the day room at Lil Wayne and yell at him “Welcome to my hood BITCH! Where’s your Cash Money now MOTHER FUCKER!”. Lil Wayne glanced back at the rather large inmate and proceeded to try and ignore him while watching TV. On our runs we would see crazy inmates in the M.O. House get pepper sprayed for fighting in the dorm and all sorts of other wild stuff…

While up in these areas for work I was given this book, which was sent to Lil Wayne. I found the Inscription to be rather interesting to say the least. 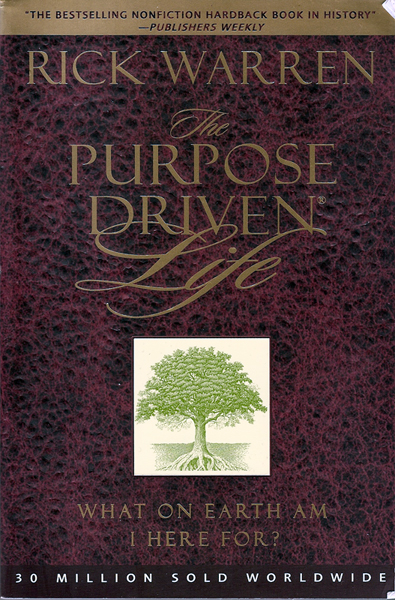 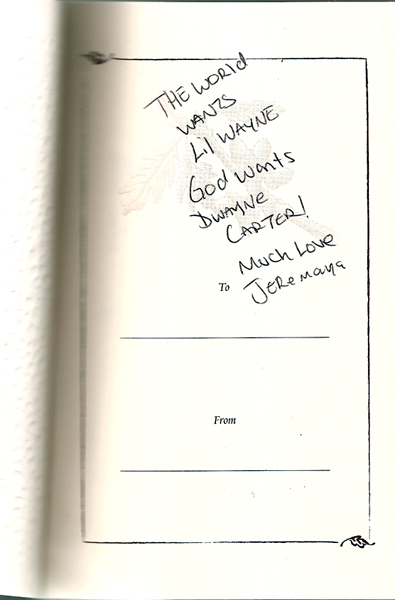 Lil Wayne was treated no different by the staff than any other inmate. He didn’t have any laptop or any other special privileges. The only thing that would separate him from the rest was that he had “front gate visits” (visits in private). Where all other inmates would see friends and family in a big gymnasium.

This is the only time he was allowed to leave his housing area, and was the only time (other than when he took methadone for drug withdrawal at the clinic) he would have any type of contact with inmates in general population while walking the halls to his visits. He would always look at the floor and never talk as he was escorted by captains to his visit. He would make all attempts to avoid any type of eye contact with any other inmate. 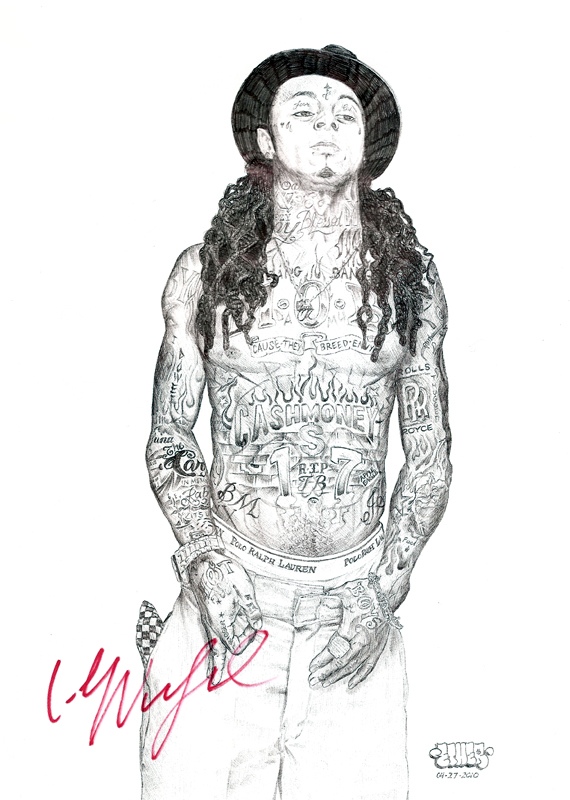 While locked up I drew Lil Wayne from the Rolling Stone cover he was featured on. I had professional prints sent into the jail to sell and get copies (some of which were later confiscated by Correctional Officers) signed by Weezy for friends and family. I spent days trying to steal a sharpie from various areas around the building. I eventually had to buy one with some commissary soups from a gay inmate who would get sharpies from program offices and use them for lip liner.

At times around the jail you would hear ridiculous stories, lies and rumors about Lil Wayne. Randomly in intake and other parts of the building you would find little stick figure drawings of him behind bars. I would normally ignore most of the ignorant comments and lies that the inmates would say in regards to Lil Wayne. I would sit back and let them talk their bullshit without letting them know I delivered his food and others. My friend and co-worker made that mistake once; he was later asked by Blood Gang Members to send kites (letters from one inmate to another which is against the rules of the jail) to Wayne, asking for money or legal representation for appeals and other open cases. Soon after receiving my drawings of Lil Wayne, I was moved out of my working dorm to a high risk “main” dorm for an unrelated “incident” in the house, consequently I was no longer able to work anymore… – Ether Mul