In the video above, you can watch some short behind the scenes footage from Lil Wayne‘s VIBE Magazine photo shoot. I don’t know exactly what date the magazine will be available on newsstands, but it will be around early October. You can view the front cover for the October/November issue here!

As a bonus, I have also included a photo of Weezy‘s birthday cake that Divine Delicacies created for his 29th birthday. Hit the jump to view the pic and read some info about the cake. 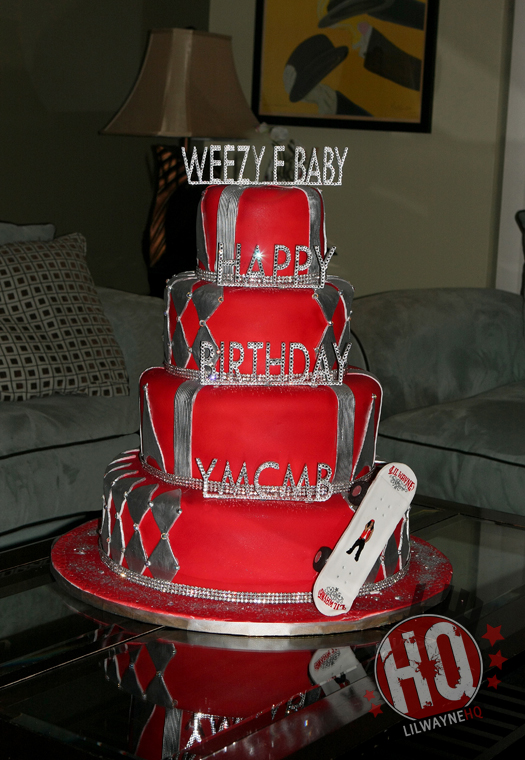 A 7:00pm phone call got the rolling pins turning at Divine Delicacies, when word hit that Lil Wayne needed a four-tier treasure from which to blow out his candles in just under three hours. Not only did the request come in at the tail end of the day, but Weezy specifically requested the cake be a Divine Delicacies creation. Perhaps that’s because he knew these purveyors of edible art would deliver big.

And big they did.

Custom Swarovski crystal signage was created by Miami Cake Monogram and the verbiage read like an homage to the birthday boy: WEEZY F. BABY, HAPPY BIRTHDAY and YMCMB, were neatly stacked on each tier.

The vanilla rum cake rolled in red fondant also donned four crystal ropes and a special sugar skateboard with Lil Wayne airbrushed on it as a tribute to his recent sidewalk hobby—sounds delicious. – HL