Lil Wayne Walks With Floyd Mayweather Jr. To The Ring For His Fight Against Robert Guerrero 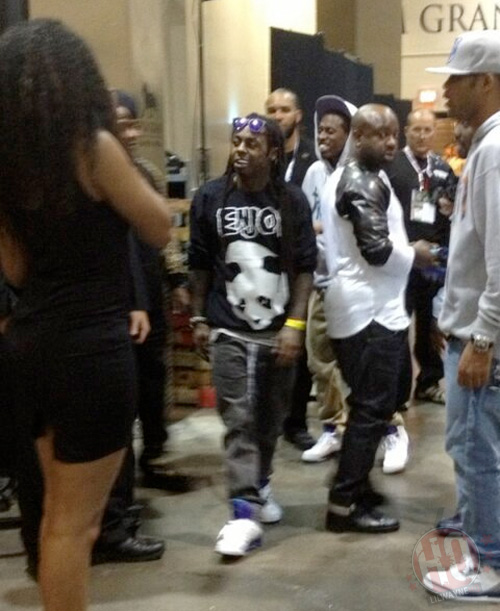 Lil Wayne accompanied Floyd Mayweather Jr. last night as he walked to the ring for his fight against Robert Guerrero at the MGM Grand Arena in Las Vegas, Nevada. While they were walking to the ring, Weezy F Baby rapped along to his “No Worries” single – most likely because of the “you see Money right there” lyric.

You can watch footage of Floyd and Tunechi‘s entrance after the jump below, as well as an interview Mayweather did after the boxing match with Tune standing next to him, plus a clip of Wayne laughing during the fight. During the interview, Floyd Mayweather Jr. thanks Young Money for their support and tells people to go get the I Am Not A Human Being II album!

END_OF_DOCUMENT_TOKEN_TO_BE_REPLACED

Above, you can listen to the audio off another clip from MTV‘s interview with Lil Wayne that took place at the 2012 Magic Convention on August 20th in Las Vegas, Nevada. Weezy speaks on how he isn’t satisfied with Young Money‘s accomplishments, which just shows that he won’t be retiring from music anytime soon.

Wayne will be attending the 2012 MTV Video Music Awards on September 6th at the Staples Center in Los Angeles, California. Let’s hope he picks up the awards for the two categories he is nominated in – “Best Video With A Message” and “Best Hip-Hop Video“. Also, I wonder what Tune will be wearing this year after all of the controversy he got last year for closing out the awards show wearing skinny leopard pants (not leggings like everyone thinks) ❓