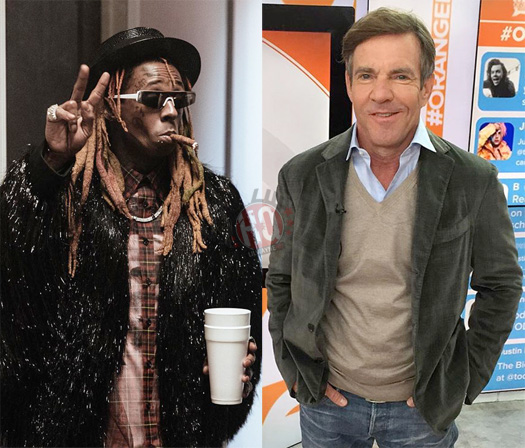 Earlier this month, Dennis Quaid made an appearance on “Jimmy Kimmel Live!” to discuss playing a villain in The Intruder and to promote his new film, A Dogs Journey.

At the 2:00 mark of their interview, Jimmy asked the actor and musician what kind of music does he listen to and to everyone’s surprise, he mentioned that he listens to Lil Wayne.

Dennis also called Tunechi a “poet” and says he is the “Bob Dylan of our time”. He even did a little cover of Tune‘s “Lollipop” single. Check it all out in the video after the jump below!

END_OF_DOCUMENT_TOKEN_TO_BE_REPLACED

‘You don’t expect Lil Wayne to be singing like this,’ he says of Weezy tackling Bob Dylan’s verse from the original.

“They each put their own distinctive stamp on it,” Haggis, who wrote and directed the Oscar-winning film “Crash,” told MTV News. “So say he did the Bob Dylan part — well, those are lines Bob Dylan did, and no one can ever sing them like him again. But when Lil Wayne sings them, you’ll never imagine someone else singing them [either].”

Wayne said the opportunity to be involved in such a major undertaking is something his children can hold on to forever. As for his mother, he chuckled when he said that all she asked was that he get Gladys Knight’s photo for her. “I’m still overwhelmed,” Weezy said, looking around the room at the galaxy of stars that ranged from Pink and Carlos Santana to Usher and Barbra Streisand. “I was like, ‘Where do I fit in?’ I thought my name got mixed up.”

Haggis at first joked that Wayne sang his verse just like Dylan. “Very much like Bob,” he quipped. But the director said the sum of the parts on the remake will be just as inspiring as the original.

Via MTV, and the video premieres tonight at NBC’s coverage of the opening ceremony of the Vancouver Winter Olympics. Then, the track will be available on iTunes for download. Hit the jump to see an interview StreetGangs did with Jay Rock were they talk about a few things including Lil Wayne and Bloods: