Last week, I posted photos of Lil Wayne skateboarding at Paul Rodriguez’ private skate park in Los Angeles, California with Manny Santiago, Spanish Mike, Dave Bachinsky, Chance Eldridge, Dan Abadi, and Jonny Hernandez. Now in the video above, you can watch some footage from their 3AM skating session.

In related news, hit the jump to check out a video of Weezy F Baby leaving a skate park in Hollywood and showing love to fans by signing a skateboard and taking photos with them!

END_OF_DOCUMENT_TOKEN_TO_BE_REPLACED 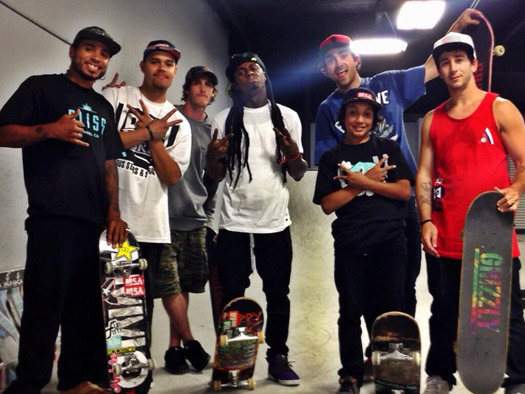 Weezy F Baby even went on Twitter to share a photo of him skating at the park with this caption: “At my ni55a P Rod spot! Lets play Big bank take lil bank ni55a!”

Check out more photos of Wayne at the Paul Rodriguez skate park below, courtesy of Dan Abadi.