Lil Wayne’s I Am Not A Human Being Goes Gold!

Lil Wayne‘s latest album, I Am Not A Human Being, that he released from behind bars has been certified gold! Weezy released the album just over two months ago, and it has just recently passed the 500,000 copies sold mark. This is second time in a year Tune has been certified gold, because in March he also sold over 500,000 units for Rebirth.

Lil Weezy is currently working on Tha Carter IV, and hopefully he will shoot a few music videos for some of the joints on the IANAHB album. Congrats once again Wayne!

PS: If you didn’t purchase the album or you wanna buy it again, then you can do so here from iTunes.

Lil Wayne Has Been Sentenced To A Year In Prison

The time has finally come for Lil Wayne… he got sentenced to one year in jail earlier today at around 2PM. As previously reported, Wayne‘s sentencing got delayed a couple of times due to dental surgery and a fire. If Weezy maintains good behavior inside prison, his sentence can be shortened to up to eight months which would mean he would be out later this year. Lil Tunechi‘s very last tweet on his twitter account reads: “Law is mind without reason. ……………..I’ll return”, and here is an update from today inside the Manhattan courthouse courtesy of J-Rod: “Lil Wayne didn’t speak in the court room, but nodded that he understood the charges. Then he nodded again to Birdman as police cuffed him”.

Even though we won’t be seeing Wayne for a while, we will still be getting new music and music videos from him throughout his time in prison. He shot around 30 to 40 music videos before his jail sentence and some of the music videos we can be looking forward to are: “Steady Mobbin’” and “Single” from the No Ceilings mixtape. Also, I’m not 100% sure, but Wayne might be able to use his Twitter while in prison to keep his fans updated.

LilWayneHQ wants to send/give all the support to Lil Wayne, and we will see you in close to a year… FREE WEEZY ❗

Hit the jump to see more photos of Wayne, including him sleeping on the plane journey to New York, a video of Wayne appearing to court, The Game speaking about Tune going to jail, and a video of Birdman and Slim outside the courthouse. You can also see some pics of Weezy in the courtroom here.

END_OF_DOCUMENT_TOKEN_TO_BE_REPLACED

Looks Like Lil Wayne Will Be Going To Prison (Pleads Guilty) 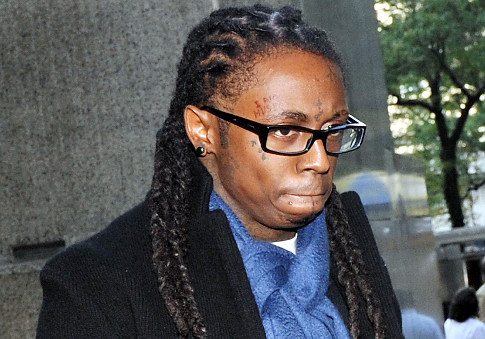 As reported earlier, the rapper is expected to receive a maximum sentence of one year in jail, although he is expected to serve around eight months in prison for the offense.

The rapper had previously pleaded not guilty to the charges, but changed the plea to avoid a trial that was due to start January 20 and could have resulted in at least 3 ½ years in prison.

The guilty plea stems from an incident in New York in 2007, after police found a .40 caliber handgun during a search of his tour bus.

Originally, lawyers for Wayne planned to contest the charges.

Yesterday (October 21), the plea was entered after Wayne’s DNA evidence was allegedly found on the weapon and deemed admissible by a judge.

The DNA evidence found was reportedly small, and Wayne’s lawyers initially sparred with the prosecution over whether the DNA profiling technique used was scientifically acceptable.

Before the trial, Lil Wayne’s manager had publicly taken responsibility for the gun on the rapper’s VH1 special.

Lil Wayne, 27, also faces a trial in Arizona for felony drug possession and weapons charges, after a 2008 arrest during a routine stop at a U.S. Border Patrol checkpoint.

Via AHH and this is terrible news 🙁 He will probably have to cut his dreads, and you can view a video below of Lil Wayne turning up to court earlier: