Above, Lil Wayne gives Karmaloop a shout out at the TRUKFIT apparel launch party in New York City on January 12th. Karmaloop will add around 40 items of Tune‘s clothing line including t-shirts, raglans and hats at the end of this month for people to purchase, and then in March have around 100 items available for people to order. Russell Simmons also gives Weezy some props in the video and says: “What Lil Wayne does speaks to the next generation”. Do you agree with Russell ❓

After the jump, you can view a few photos of Tunechi and Young Money’s Mack Maine and T-Streets at LIV in Miami on Sunday, January 15th.

END_OF_DOCUMENT_TOKEN_TO_BE_REPLACED 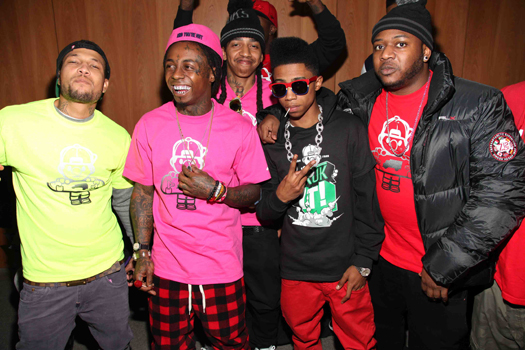 Check out some photos in this post of Lil Wayne celebrating his TRUKFIT clothing line during Market Week in New York City last night (January 12th). Weezy was joined by Russell Simmons, Mack Maine, Lil Twist, T-Streets, Cortez Bryant and Marley G (who we ain’t seen with Wayne in a while). You will be able to purchase TRUKFIT apparel next month in Zumiez stores and on Karmaloop.com. Hit the jump for the rest of the pics, courtesy of KC!

END_OF_DOCUMENT_TOKEN_TO_BE_REPLACED

“I’m so excited I plan to drop a single in January,” said Khaled. “Of course, I’ma be rocking with Weezy, that’s my brother, as soon as he gets a chance in his schedule for us to get in the lab, I’ma be there and I’mma be there for him.”

“It’s one big family, YM/CMB, We the Best. Shout to Slim, Birdman, Mack Maine and Lil Wayne for letting me a part of a incredible family, incredible team,” Khaled said.

Above, Sway from MTV speaks to DJ Khaled about working on his upcoming album that is dropping in 2011 on Cash Money Records, and says Weezy will be on the LP. After the jump, you can watch a video of some celebrities including: Russell Simmons, Ciara, Twista, Cee-Lo, Big Sean, Jim Jones, Donnis, Ed Lover, David Banner, Jazmine Sullivan, Bow Wow, Saigon and more welcoming Lil Wayne home.