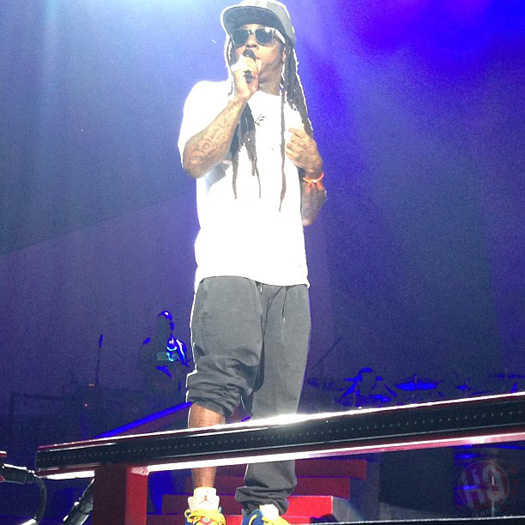 Last night, Lil Wayne performed live at the Toyota Pavilion in Scranton, Pennsylvania for a stop on his America’s Most Wanted tour. As you can see in the photos after the jump below, Tunechi brought out Birdman and T.I. to perform their collaborations together.

Weezy F Baby will next be performing live on his music festival tomorrow (July 23rd) in Bangor, Maine at the Bangor Amphitheater!

END_OF_DOCUMENT_TOKEN_TO_BE_REPLACED

Lil Wayne wasn’t scheduled to go onstage during the dress rehearsal Sunday night at the Toyota Pavilion at Montage Mountain, 24 hours before the launch of Young Money Presents: The America’s Most Wanted Music Festival.

Weezy F Baby was simply supposed to sit and watch his band and dancers go through the set. So, when the practice run of his set began, Wayne and his Young Money family were watching from about 12 rows back.

As “A Milli” played, the smoke and explosions were right on point. “They say I’m rappin’ like Big, Jay and Tupac,” his recorded voice repeated a few times, with blast of smoke coming from the floor each time he said the line.

But finally, Wayne, wearing a white T-shirt, black-and-red basketball shorts and black-and-red Jordans, got up out of his seat and hit the stage to finish the song.