END_OF_DOCUMENT_TOKEN_TO_BE_REPLACED

Megan Thee Stallion Discusses Why Lil Wayne Is One Of The G.O.A.T.s & His Influence On Her Music [Video] 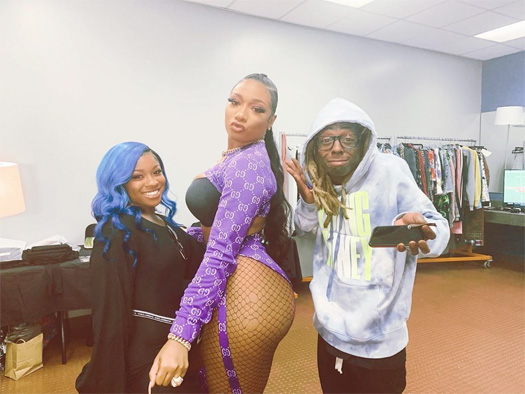 Megan Thee Stallion recently chopped it up with Teen Vogue to create the music playlist to her life, which you can check out below.

One of the songs she picked was Young Money‘s “Every Girl” single to which she then praised Lil Wayne and discussed how he is one of the G.O.A.T.s, as well as how he had a big influence on her.

The female artist from Houston also called Wayne one of her “favorite rappers”, revealed why she enjoys his “Every Girl” verse so much, mentioned loving how cocky he talks, recalled watching all of his music videos and listening to all of his mixtapes, and much more!

Would you like to see a collaboration from these two in the future?

END_OF_DOCUMENT_TOKEN_TO_BE_REPLACED

YFN Lucci sat down with Premium Pete on his The Premium Pete Show last month for a 45-minute interview, which you can check out below.

At the 27:00 mark, Lucci speaks on dating Lil Wayne‘s daughter Reginae Carter and how her parents just want Nae Nae to be happy. He even says Wayne had that “talk” with him that went something like: “as long as she [Reginae] love you, the family love you. If she don’t, then it’s a problem”.

Later on in the conversation around the 32:50 mark, the Atlanta rapper reveals he never expected someone like Tunechi to do a song with him and explains how the “Key To The Streets” remix came together. He also mentions that he was in hospital when he first heard the Tune verse and because it was a long one, the record label tried to cut it short!