Above, you can watch a 30-minute video of Lil Wayne performing live at the Gexa Pavilion in Dallas, Texas on August 16th. Tune can be seen performing “I’m Goin’ In“, “Blunt Blowin’“, “John“, “Trippy“, “Gunwalk“, “Days & Days“, “Bandz A Make Her Dance“, “Duffle Bag Boy“, “Rich As Fuck” with 2 Chainz, “How To Love” with Shanell, “She Will“, and speaking to the crowd.

After the jump below, you can watch some footage of Weezy F Baby performing “Karate Chop” and “No New Friends“. Click here to view photos from the Dallas concert!

END_OF_DOCUMENT_TOKEN_TO_BE_REPLACED

In the video above, you can watch some footage of Lil Wayne performing live at the Riverbend Music Pavilion in Cincinnati, Ohio on August 6th for a stop on his America’s Most Wanted tour. 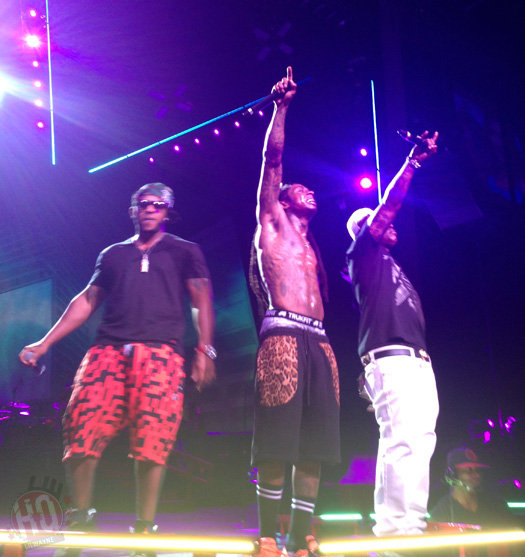 On July 31st, Lil Wayne performed live on his America’s Most Wanted tour at the Comcast Theatre in Hartford, Connecticut. I have already posted up photos of Tunechi from this show, but Paul Pastor just sent over some more dope pics and videos that he captured from front row.

The next stop on Wayne‘s America’s Most Wanted music festival will take place tonight in Washington, D.C. at the Verizon Center!

END_OF_DOCUMENT_TOKEN_TO_BE_REPLACED

Lil Wayne Brings Out Drake To Perform “Versace” & “Started From The Bottom” In Buffalo, New York

Last night, Lil Wayne brought out Drake, Birdman and Mack Maine during his America’s Most Wanted concert in Buffalo, New York at the Darien Lake PAC. In the video above, you can watch Drizzy performing his remix to Migos’ “Versace” song.

After the jump below, you can watch some footage of Drizzy Drake performing “Started From The Bottom” and Tune performing “Steady Mobbin’“, “John“, “Trippy“, “Gunwalk“, “Rich As Fuck” with 2 Chainz, “Lollipop“, “Got Money“, “I’m Goin’ In“, and “Karate Chop“.

Click here to view photos from the Buffalo show! Weezy F Baby will next be performing live on his music festival in Hartford, Connecticut at the Comcast Theatre tonight.

END_OF_DOCUMENT_TOKEN_TO_BE_REPLACED 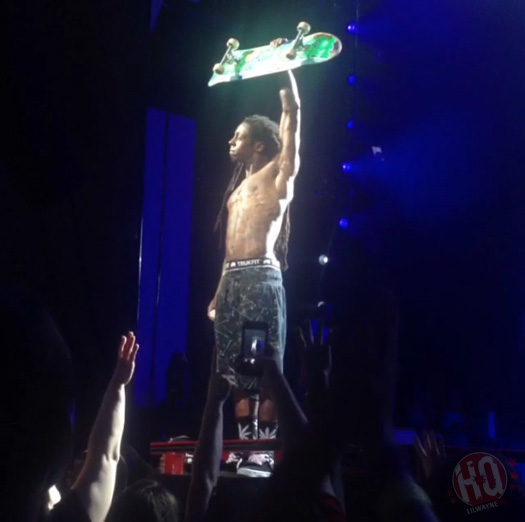 Yesterday, Lil Wayne performed live at the Verizon Wireless Amphitheater in Charlotte, North Carolina for a stop on his America’s Most Wanted music festival. The next stop on Tune‘s tour will take place tonight at the Time Warner Pavilion in Raleigh!

You can view ten more photos of Weezy F Baby performing with T.I. and Birdman after the jump below, as well as some footage of him performing “I’m Goin’ In“, “Trippy“, “Rich As Fuck” with 2 Chainz, “Ball” with Tip, “No Worries“, and “A Milli“.