MTV revealed the nominations for their 2016 Video Music Awards yesterday and Lil Wayne picked up a nomination.

Weezy was nominated in the “Best Collaboration” category with Ariana Grande for their “Let Me Love You” single.

This year’s MTV VMA show will air live on Sunday, August 28th from 9PM at the Madison Square Garden in New York City.

Hit the jump to see who Tunechi and Ariana will be going up against to win the “Best Collaboration” award!

END_OF_DOCUMENT_TOKEN_TO_BE_REPLACED

Above, you can listen to the audio from MTV‘s interview with Lil Wayne that took place backstage at the 2012 MTV Video Music Awards just after Weezy had finished performing live with 2 Chainz.

Tune discusses how it felt performing at the awards show with his close friend 2 Chainz and the stage dive he did at the end of his set!

Stage dive – “That was my first time doing that. I’m trying to get better every day.”

Performing with 2 Chainz – “That’s my best friend, that’s my homie from back in the day. It’s almost like — I don’t wanna say it, it seem crazy when I say it, but it’s like watching your child up there. It feels too good; it’s a weird feeling.” 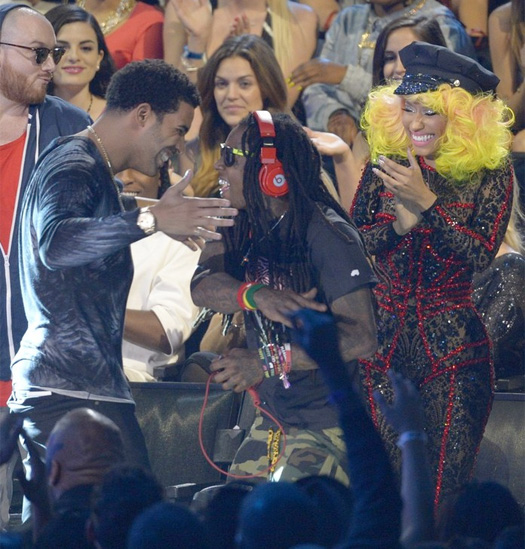 Last night, 2 Chainz and Lil Wayne performed “Yuck!” at the 2012 MTV Video Music Awards in Los Angeles, California at the Staples Center. After they finished that, they both went straight into Weezy‘s new single, “No Worries“, which I don’t know about you, but I can’t stop playing it!

There were some funny parts about the performance, such as 2 Chainz sitting down on Tune‘s skateboard and pushing himself on it, plus Wayne jumping in the crowd at the end and crowd surfing. The only bad thing was that his microphone was too low.

You can check out their full performance in the video above.

Lil Wayne Will Perform “No Worries” At The 2012 MTV VMAs, Pictures From His Rehearsal

Tomorrow night (September 6th), Lil Wayne will be attending and performing live at the 2012 MTV Video Music Awards at the Staples Center in Los Angeles, California, which will start at 8PM EST. MTV confirmed earlier today that one song Weezy F Baby will definitely be performing at the show is his new single, “No Worries“, for the first time live since it dropped on his Dedication 4 mixtape.

I wonder what other track(s) Wayne will perform? Maybe “My Homies Still“? Anyways, Tune is also nominated for two awards at the event, so fingers crossed he picks up those!

Hit the jump to check out more photos from Tunechi‘s rehearsal that took place on Monday, September 3rd, courtesy of John Shearer (Invision). He can be seen rocking his TRUKFIT apparel with an Odd Future “Golf Wang” t-shirt. Do you think Weezy will wear something similar to his skinny leopard pants that he rocked at last year’s show ❓