Here is Weezer‘s “Can’t Stop Partying” which features Lil Wayne from their upcoming album titled Ratitude. You can listen and download the song below:

Shouts to Adzy and remember where you heard this first 😉

The Weinstein Company, the studio home of Lil Wayne and Bow Wow’s Post-Katrina basketball film Hurricane Season, has just announced their 2009 – 2010 film slate. Unfortunately for those involved in making Hurricane Season and those Wayne fans hoping to get a glimpse of him playing a punk high school kid, the movie has been dropped from the schedule…again. Many involved with the film were optimistic that it would get a proper release but due to major financial issues facing the Weinstein Company including recent layoffs, the film has been shelved indefinitely. In a recent interview with the Times Picayune – New Orleans, Hurricane Season producer Raymond Brothers still hopes for the best.

“We’re very grateful to the Weinstein Co. and (sister company) Dimension for making the movie in New Orleans — we spent $50 million in New Orleans. The movie tested extremely well, and we’re very hopeful that in a very short period of time we’ll come to some resolution about the release date.”

Considering the multi-million dollar budget, urban appeal with Lil Wayne and Bow Wow and major star appeal with Forest Whitaker, one hopes this movie will not get the dreaded straight-to-DVD treatment. Some Wayne fan out there needs to start a petition and get this movie in theaters.

Shouts to WoooHa, and this movie is turning out like Rebirth with the push backs 🙁

Also hit the jump to see Juvenile talk about the old days with the Hot Boys, and Weezer perform “Can’t Stop Partying” without Weezy:

END_OF_DOCUMENT_TOKEN_TO_BE_REPLACED 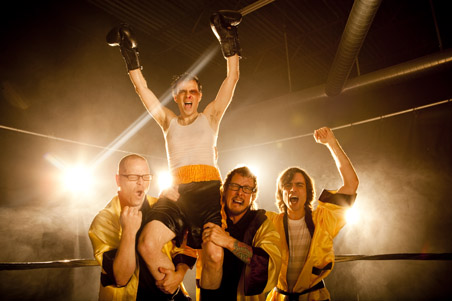 Weezer Team Up With Lil Wayne For “Can’t Stop Partying”

By now, you are probably aware that on Weezer’s upcoming Raditude album (a.k.a. “the one with the dog on the cover”), frontman Rivers Cuomo has decided to shake things up, working with the All-American Rejects’ Tyson Ritter and Nick Wheeler, Butch Walker and super-producer Dr. Luke.

But the shaking didn’t stop there. Perhaps taking a cue from Girl Talk or millions of amateur mash-up auteurs out there, Cuomo has recruited none other than Lil Wayne to contribute a verse to a song on the album.

“Weezer is always trying something new,” Cuomo told MTV News. “Last year, we put out The Red Album. We loved that album, but this is 2009. It’s time to do something totally different. So I reached out to some friends of mine in different genres: Jermaine Dupri, for example, king of R&B, I wrote a song with him called ‘Can’t Stop Partying.’ It was a real challenge for me, taking his ideas, which are very slick, R&B party [ideas], and giving it some kind of edge, some darkness, making it work with rock, making it work with Weezer.

“Not only that, but we got Lil Wayne to come in and do a rap on it,” he continued. “Any other rapper would’ve just done, ‘Yay, we’re partying! Let’s drink and have fun,’ but he gave it the edge I was looking for. You can hear in his voice, it sounds so dark, like he was gonna get shot or something when he walks out of the studio. So I was real happy that everyone involved got what we were going for.”

While a Weezer/Weezy collabo does seem a bit odd, it’s keeping in theme with Raditude’s party-hearty ethos. And it’s not like Wayne is new to the rock game, either. Last year, he appeared on Fall Out Boy’s Folie à Deux, and then there’s his much-delayed “rock” album, Rebirth, which is set to be released in December.

Shouts to MTV. What are your thoughts on this collaboration ❓