Twista Pays Homage To Lil Wayne – “He Did What Tupac Did” 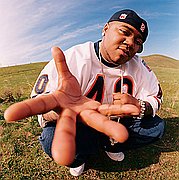 Rap veteran Twista has become the latest artist to pay homage to Lil Wayne and has pointed out the similarities Weezy shares with the late Tupac Shakur.

Speaking on Wayne‘s autotune usage, Twista also explained the motivation he brings out of him.

“You can’t really hate on Lil Wayne for it ’cause no one had done it before in rap,” Twista said in an interview. “He was the first one that done it, so, you have to respect that. I love Lil Wayne ’cause one, he did what Tupac did — brought a lotta records out and exceeded the normal rapper’s output. And two, he’s one of the last rappers that still makes me want to rap. Like other rappers I listen to and don’t feel nothing. But I can listen to Wayne and get inspired to pick up the pad and write something myself.”