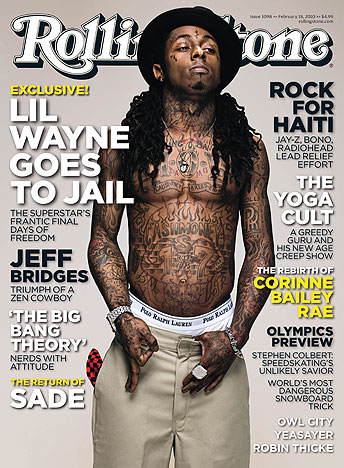 For a decade, Lil Wayne has been hip-hop’s great unstoppable force, a 24-hour-a-day recording machine without an off button. But on February 9th, Lil Wayne will have to stop — for 12 months, when he reports to prison to serve a sentence for gun possession stemming from a 2007 arrest in New York City. Rolling Stone stays up all night with Weezy as he prepares to get locked down in our new issue, which is on sale at newsstands today.

“I don’t like to stop,” Wayne tells RS‘ Chris Norris. “I believe you stop when you die.” So in the weeks before he reports to Rikers Island, Wayne is keeping busy — recording tracks bound for Tha Carter IV (the album Cash Money staffers call “C4″ because it’ll be the bomb), shooting videos with his Young Money protégés, spending time with his growing family, and deliberately not asking anyone for advice about life on the inside. “This is Lil Wayne going to jail. Nobody I can talk to can tell me what that’s like,” he says. “I just say I’m looking forward to it.”

While Weezy’s away, his label is relocating to New York to be near him, and his manager Cortez Bryant is exploring ways to keep Wayne in his fans’ minds for the duration — from jailhouse Twitter accounts to endorsements. “I’ll have an iPod, and I”ll make sure they keep sending me beats,” Lil Wayne says. Tha Carter IV — which Norris is told features tougher, faster beats — is scheduled to arrive shortly after he gets out.

Read the full story in the new issue for Wayne’s comments on giving up drank, growing older and fearing God, plus a close-up look at one of his intense late-night recording sessions.

Source: Rolling Stone, and it looks like we will be getting Tha Carter IV shortly after Lil Wayne gets out from prison. I also like how Weezy will be using using Twitter from jail (if that’s what they mean).