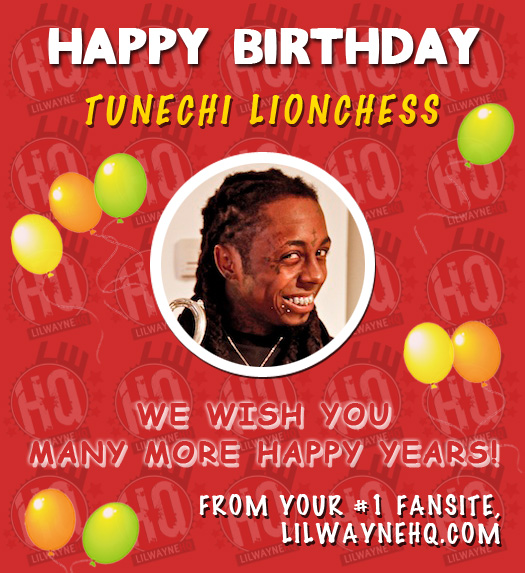 Today is Lil Wayne‘s 30th birthday! Everyone at LilWayneHQ.com would just like to wish Wayne a Happy Birthday and hope he has a great day.

Weezy F Baby has now been in the music industry for around 20 years and is still on top releasing hot music consistently and making us all laugh with his “I Don’t Give A Fuck” attitude that can be seen in videos such as his recent deposition. I’m pretty sure that this is why most of us are fans of Weezy and continue to support him, as well as look up to him for inspiration.

Since his 29th birthday, Tunechi has had another successful year with his TRUKFIT clothing line being sold in stores such as Macy’s, linking up with Mountain Dew for their “DEWeezy” campaign, getting a crazy amount of downloads and great feedback on his Dedication 4 mixtape, winning a MTV VMA award for “Best Hip-Hop Video” and a BMI Urban Music award for “Songwriter Of The Year” (both with Drake), and three of his Young Money artists dropping albums (Take Care, Pink Friday: Roman Reloaded and Careless World).

Just over a month ago, we saw a video of Lil Wayne speaking about DJ Scoob Doo‘s upcoming project called Bread Over Bed and explaining what exactly Bread Over Bed means. Today, another video of basically the same thing was released, but it was filmed in Weezy‘s crib and you can see all of the awards that he has won standing up behind him.

The names of the winners at the 2012 Billboard Music Awards are in and Lil Wayne has picked up a total of four awards! Billboard‘s awards show aired live on May 20th from the MGM Grand Arena in Las Vegas, but unfortunately no one from YMCMB was in attendance. Weezy won an award for “Top Male Artist”, “Top Rap Artist”, “Top Rap Album” with Tha Carter IV and “Top R&B Song” with “Motivation“. You can view a full list of all the winners from the 2012 Billboard Music Awards show here.

When Wayne found out about the awards he had won, he went on Twitter to tweet the following message thanking his fans, family, God and Billboard:

END_OF_DOCUMENT_TOKEN_TO_BE_REPLACED

The 2011 BET Hip Hop Awards aired on TV last night and it would of been nearly impossible for Lil Wayne not to win at least one award! Weezy ended up winning a total of five awards at the show as well as his Young Money artist Nicki Minaj winning two awards. Both Tunechi and Nicki didn’t attend the awards show for some unknown reason, but YMCMB’s Tyga did rep the team in his cypher that you can watch here. Hit the jump to view the awards Tune and the Barbie won:

END_OF_DOCUMENT_TOKEN_TO_BE_REPLACED

Young Money’s Nicki Minaj announced the nominations earlier today for the 39th Annual American Music Awards! Weezy picked up 3 nods including: “Favorite Rap/Hip Hop Music Artist“, “Favorite Rap/Hip Hop Music Album” and “Artist Of The Year“. The 2011 AMAs will air live from the Nokia Theater in Los Angeles on November 20th at 8PM on ABC. You can view the full list of nominations over on Rap-Up.