In the video above, you can watch the latest Mountain Dew commercial starring Lil Wayne called “This Is How We DEW“. The advert was directed by Chris Robinson and will be shown on television to promote Mountain Dew, as well as the “DEWeezy” campaign.

Click here to check out some photos from the commercial shoot and here to view three rough cuts. You can also watch Mountain Dew and Weezy F Baby‘s previous commercial collaboration here!

In related Tunechi news, hit the jump to view another recap of what went down at the grand opening of Wayne‘s Trukstop skate park in the Lower 9th Ward Village of New Orleans, Louisiana on September 26th.

END_OF_DOCUMENT_TOKEN_TO_BE_REPLACED

Check out some more footage from the grand opening of Lil Wayne‘s Trukstop skate park, which he helped build as part of his “DEWeezy” campaign in the Lower 9th Ward Village of New Orleans, Louisiana on September 26th. In the video above, you can watch TRUKFIT‘s recap of the event and after the jump, you can watch Mountain Dew‘s recap of event. Enjoy!

END_OF_DOCUMENT_TOKEN_TO_BE_REPLACED

Yesterday, Lil Wayne cut the ribbon to open his Trukstop skate park that he helped build along with Mountain Dew in the Lower 9th Ward Village of New Orleans, Louisiana, which was the worst place Hurricane Katrina hit back in 2005. You can watch a video above and two clips after the jump of Weezy having fun at the skate park grand opening, as well as delivering a speech to the people who attended!

Tune talked about why he started skateboarding and explained the reason behind wanting to build a skate park in his city New Orleans. After giving his speech, Wayne had a little skating session himself at the Trukstop skate park with professional skaters Paul Rodriguez and Theotis Beasley.

END_OF_DOCUMENT_TOKEN_TO_BE_REPLACED 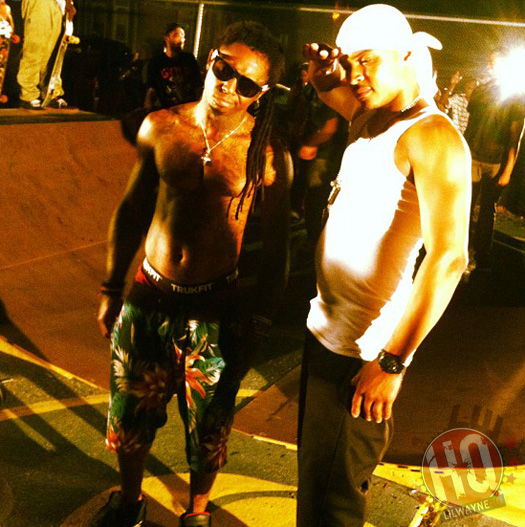 END_OF_DOCUMENT_TOKEN_TO_BE_REPLACED

We already know that Lil Wayne went platinum with Tha Carter IV in the first week worldwide, but it has took Weezy 2 weeks to officially go platinum with C4 in the US. The album sold 219,000 copies this past week, bringing the total album sales in the US at: 1,183,000! Tunechi‘s Tha Carter IV album is currently still at the #1 spot on the Billboard 200 chart too.

In other news, Lil Wayne has had his own personal skate ramp built in to the back of his Cadillac Escalade. The ramp is portable and will pull in and out of his Escalade, which will let Wayne practice his skateboarding skills while he is on the road touring. You can read what TMZ reported below: