END_OF_DOCUMENT_TOKEN_TO_BE_REPLACED

At the Miami club, Weezy was joined by his Young Money artists Mack Maine, Euro and Jay Jones, as well as Kanye West, who chilled with him in VIP.

You can check out some footage and photos of Tunechi and Yeezy together, as well as Tune performing “A Milli“, “Steady Mobbin’“, “Uproar“, and “No Problem” live below!

END_OF_DOCUMENT_TOKEN_TO_BE_REPLACED 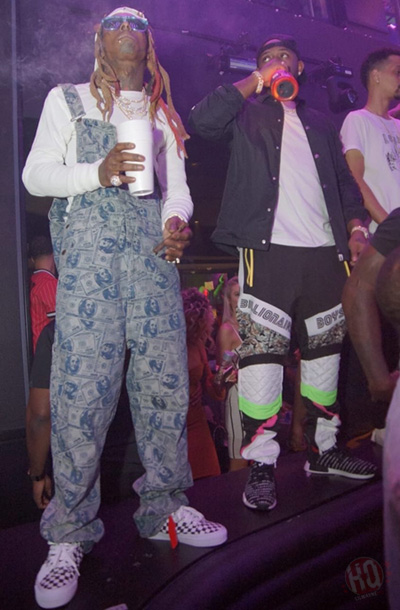 END_OF_DOCUMENT_TOKEN_TO_BE_REPLACED

Are Curren$y & Lil Wayne About To Host A Show In Hollygrove, New Orleans?

Last night, Lil Wayne had an appearance and performance to make in Columbus, Ohio for a stop on his current “Release Partiez” nightclub tour. Curren$y was also in the same area at the same time making a cool coincidence.

While they were both in the same city, they decided to chill and smoke together on Weezy‘s tour bus. They also took a picture for Instagram, which you can view above with the following caption:

“Finna throw a concert in Hollygrove… Love hahaha… Jumped off my tour bus in Columbus Ohio after my show to burn one wit my long lost on his tour bus… ‘We both outta town dawwgg .. What u Tryna get into??'”

So could Tunechi and Spitta be about to hold a show in Hollygrove, New Orleans, Louisiana? Hopefully if this is serious, more details will surface online soon!

On one upcoming episode of “The Show With Vinny“, Lil Wayne will make an appearance to chill, eat, go to the toilet, and visit a skatepark with Vinny Guadagnino and his family.

In the video above, you can watch a trailer for the show which includes Weezy F Baby eating Vinny‘s mother’s food and laughing at Uncle Nino‘s joke: “I’m 10 percent black… all in one place though”. Vinny also gets excited when Wayne asks him if he can use his restroom: “Lil Wayne is taking a piss in my bathroom, what the fuck”.

If you can’t watch the clip above, I have included a YouTube version that you can watch after the jump below, but you will have to turn your volume up!