Drake Promises: “You Won’t Even Notice Lil Wayne Is Gone”

On his new single “Over,” Drake raps, “Making sure the Young Money ship is never sinking.” Even though the head of his label, Lil Wayne, is in jail, Drake insisted there’s no way he’ll let the camp slip from its top spot.

“I’m gonna do everything I told him I would do, what I said in the song: keep us afloat till he gets back,” Drake said on the set of his “Over” video. “You won’t even notice he’s gone. Promise.”

Last week, Wayne was sentenced to a year in jail for a 2007 gun-possession charge, but Drake knows his leader will be OK.

“Lil Wayne is a legend,” Drake said. “I could never classify Wayne as victim. He’s too strong to me. Wayne is who he wants to be. People don’t understand. It’s really not an act. Lil Wayne is a character you’ll rarely run across, probably for the existence of human beings. He is that guy. He is Lil Wayne for a reason. He’s a rock star, a visionary, a workaholic. He doesn’t function like anybody I know. He’s a rare breed.

“I don’t think fame really has anything to do with his situation,” Drizzy continued. “We take precautions. All of us do. To be in the public eye and to be envied and have people who hate you and never have met you or have people who love you and tattoo your face on their body and never have met you, it’s an odd feeling for anybody. It’s a rush [for me]. I love it. It gets weird sometimes. So it’s just personal choices we all make. I never felt that threatened. I’m not sure what’s going through his head at the time. But Wayne has a reason for everything, always. I trust in Wayne. I believe in Wayne. He’s gonna be all right.”

Via MTV, and hit the jump to see a video of Nicki Minaj and Drizzy speaking about Lil Wayne turning up at Jay-Z’s Madison Square Garden show, and their performance.

END_OF_DOCUMENT_TOKEN_TO_BE_REPLACED 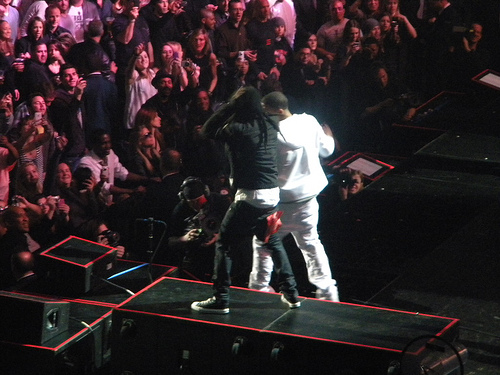 Lil Wayne was a free man last night… so what did he do with his extra night of freedom ❓ He went to the studio, and also performed at Jay-Z’s Madison Square Garden show in New York with Young Jeezy and Drake. They performed “I’m Goin’ In“, and Nicki Minaj also joined them and performed her verse in “Bed Rock“. You can view a photo above, and some more below including two videos of their performance: