Here is the official music video for DJ Khaled‘s “No New Friends” single featuring Lil Wayne, Drake and Rick Ross. The visual, which was directed by Colin Tilley, was shot at a mansion in Miami, Florida on May 15th.

Cameos in the “No New Friends” video can be seen from Birdman, Fat Joe, Mack Maine, Swizz Beatz, Mavado, and Ace Hood. Click here to check out some behind the scenes photos from the video shoot.

You will be able to find the Boi-1da and Noah “40” Shebib-produced song on Khaled‘s forthcoming album, Suffering From Success, due to be released in the summer!

This visual, which was directed by Gil Green, was shot in Miami on November 7th. The original song (without Ace Hood‘s verse) can be found on Khaled‘s Kiss The Ring album that is available in stores today!

Click here to view some photos from on set of the video shoot and here to watch behind the scenes footage.

END_OF_DOCUMENT_TOKEN_TO_BE_REPLACED

In the video above, you can watch some behind the scenes footage from DJ Khaled‘s “Bitches & Bottles (Let’s Get It Started)” video shoot featuring Lil Wayne, Future, T.I., and Ace Hood. The video shoot took place on November 7th in Miami and will include cameos from Birdman, Mack Maine, Gudda Gudda, Mavado, and Mike Will.

Click here to stream the song and here to view photos from on set of the video shoot! 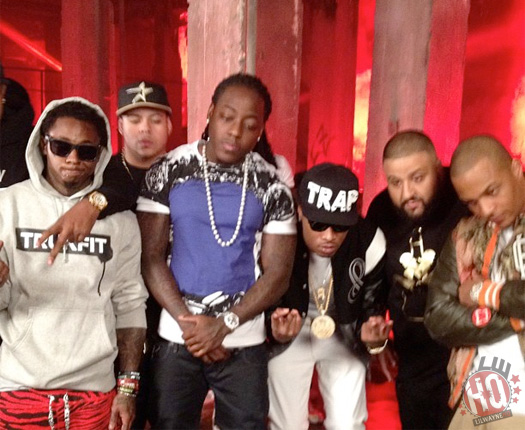 Check out some behind the scenes pictures from on set of DJ Khaled‘s “Models & Bottles (Let’s Get It Started)” video shoot that took place in Miami yesterday featuring Lil Wayne, Future, T.I., and Ace Hood. Cameos can be seen from Birdman, Mack Maine, Gudda Gudda, Mavado, Mike Will, and more.

Hit the jump to view more pics from the video shoot and click here to stream the song, which appeared on Khaled‘s Kiss The Ring album!