Ludacris recently sat down with Vanessa Satten and Shaheem Reid for an interview on XXL’s Hip-Hop Moments Of Clarity podcast, which you can check out below.

Around the 24:30 mark, Luda was asked who his top five rappers with the greatest flows of all time are to which he named: Andre 3000, Kendrick Lamar, J. Cole, JAY-Z, and Lil Wayne.

The rapper and actor did say that “this is probably, might be one of the greatest questions I’ve ever been asked”. You can watch him list five rappers that he feels have the best flows in the rap game below!

END_OF_DOCUMENT_TOKEN_TO_BE_REPLACED

While at the 14th annual A3C Music Festival & Conference in Atlanta earlier this month, Mannie Fresh chopped it up with Shaheem Reid for LiveXLive.

During their conversation, which you can check out below, Mannie spoke on how it feels to have produced on the No. 1 album Tha Carter V, knowing Tunechi‘s father personally, working with Tune, and more.

Fresh also mentioned that him and Wayne did 13 songs for Carter V, but dumbed it down to just 2 songs in 3 days (“Start This Shit Off Right” and “Perfect Strangers“). He then said that him and Weezy have talked about dropping these unreleased tracks on a project possibly called “Fresh Files” after the C5 hype has died down!

END_OF_DOCUMENT_TOKEN_TO_BE_REPLACED 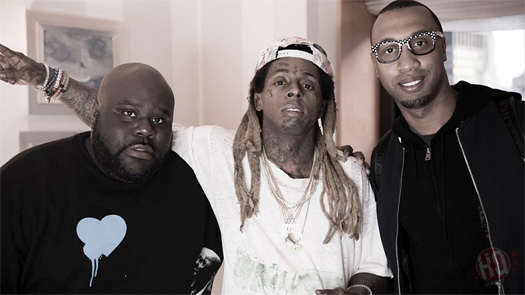 END_OF_DOCUMENT_TOKEN_TO_BE_REPLACED

Last night, Lil Wayne and Birdman hosted an All-Star event at Stereo Live in Houston, Texas. Some of the other artists who attended the party were Drake, J. Cole, Flo Rida, Busta Rhymes, Meek Mill, and Machine Gun Kelly.

According to Shaheem Reid, who was also at the party, Weezy F Baby got on the mic and announced that the Miami Heat had banned him from all NBA events. He also shouted: “Fuck the Heat, fuck LeBron, fuck She-Wade, and I fucked Chris Bosh’s wife”, as well as starting “fuck the NBA” and “fuck the Miami Heat” chants. The #1 Stunna then joined in and shouted: “If Wayne say fuck you, I say motherfuck you!”

You can watch some footage in the clip above that was filmed by someone in the audience of Tune on the mic. Shouts to TMZ.