Barack Obama: “Our Kids Can’t All Aspire To Be Lil Wayne” 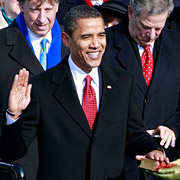 President Barack Obama paid homage to the NAACP (National Assocation for the Advancement of Colored People) at its 100 year anniversary celebration yesterday with a motivational speech.

President Obama touched on the nation’s constant struggles with discrimination despite elected minorities and the achievements of the 1960’s Civil Rights Movement.

“I understand there may be a temptation among some to think that discrimination is no longer a problem in 2009,” Obama said from the New York event. “But make no mistake: The pain of discrimination is still felt in America.”

He also referenced superstar athlete LeBron James and rapper Lil Wayne to remind families of the importance of education.