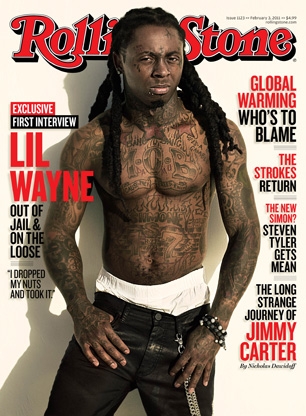 Lil Wayne covers his first magazine since being released from Rikers in November, 2010. Weezy covers Rolling Stone Magazine, and if you remember back in Feb, 2010 when he was just heading to jail, Weezy also graced the cover then as well. This issue will hit newsstands on January 21st, and you can read a few excerpts below and check out some behind the scenes footage from the shoot after the jump!

“I’d bust a nigga’s ass at Uno,” he told writer Josh Eells. “We gamble for phone time. I’d take nigga’s commissary: Lemme get them cookies, lemme get them chips, get that soup.”

Eventually his cellmates stopped inviting him to games. “They’d be like, ‘Oh, we thought you were asleep,'” Wayne says. “Like you can’t look inside my cell and see that I’m right there! We ain’t got no doors!”

When Wayne sat court-side at a recent Miami Heat/New Orleans Hornets game he was upset that Lebron James and Dwayne Wade never came over to talk to him. “Them niggas never speak to a nigga,” he says. “They don’t chuck me the deuce or nothing. Nigga spent all that money on them fucking tickets… Come holla at me. We sit right by them little bitch-ass niggas. At least come ask me why I’m not rooting for you.”

In prison he read biographies of Jimi Hendrix, Jim Morrison, Marvin Gaye, Joan Jett, Vince Lombardi and Anthony Kiedis. “Kiedis’ Scar Tissue was really good,” he says. “I also read the Bible for the first time. It was deep! I liked the parts where some character was once this, but he ended up being that. Like he’d be dissing Jesus, and then he ends up being a saint. That was cool.”

He spent his final month in jail in solitary after he was caught with an iPod charger in his cell. It could have been worse: He also had a watch with an MP3 player on it, but another inmate took the rap. “He was a solid nigga,” says Wayne. “Shout-out to Charles…Solitary was the worst. No TV. No radio. No commissary. Basically you’re in there 23 hours a day.” The only upside was he had a window where he could watch cars go by. “I used to sit at that motherfucker all day,” he says.

Thanks to RS and HHNM!