Lil Wayne was supposed to appear on “Jimmy Kimmel Live” on March 1st for an interview, but because he was having such a great time performing at the free concert in Hollywood, he missed his scheduled appearance. Jimmy Kimmel still went ahead with the show and decided to pick a member from the audience to be a fake Wayne. He gave the fake Weezy a wig and a hat, and then asked him questions but he didn’t really seem to know a lot about Tunechi. So Wayniacs, if you are interested in watching the Jimmy interview with the fake Lil Wayne, you can watch part 1 above and part 2 after the jump. Tune previously appeared on “Jimmy Kimmel Live” with Charles Gibson back in 2009.

In other news, Fat Joe recently spoke on spray painting a wall in a skateboard room in Lil Wayne‘s Miami mansion on February 29th. You can see 2 photos here and read what Joe had to say below! 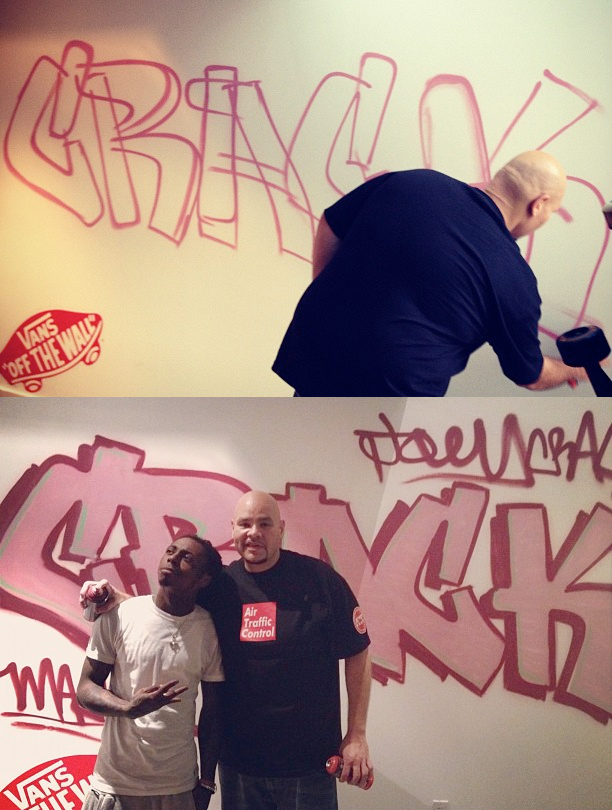 “I live down the block, across the street from him and yesterday, the nigga called me up and said: ‘Please, Joe, it would be an honor if you do a TS Joey Crack piece in my house.’ Never in my life have I done graffiti in someone’s house. I tried to talk him out of it like: ‘Wayne, forreal, you have a gazillion dollar mansion… please don’t do this.’ He was like: ‘Nah, Crack, I got a spot right there for you.’ I was like: ‘Wayne… why?’ He said: ‘Crack, we need it.’ I was a little rusty,” he said of his graff work. “I can’t front, I was rusty, but it was almost like riding a bike… once you’re half way through, it’s like, ‘Oh shit, I got this.’ That shit came out right, though. I’m proud of that shit. He got ramps on his ceiling and all that shit, yeah, he’s doing that to the highest level. I was there and he was building a fucking skateboard. He was like: ‘Yo Crack, you got to put this here.’ He found a new love, something he loves to do and that’s dope. He’s living and drinking and eating the skateboarding shit.”