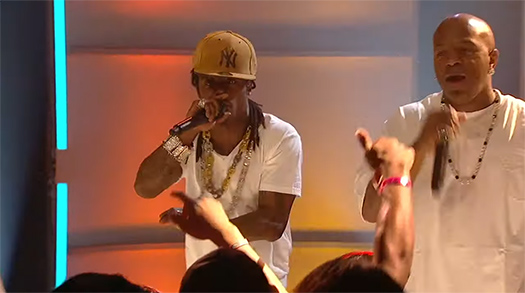 END_OF_DOCUMENT_TOKEN_TO_BE_REPLACED

After DIRECTV’s 7th Annual Celebrity Beach Bowl game in New Orleans yesterday, E! chopped it up with Lil Wayne to discuss the situation between him and a cameraman.

Still angry at the cameraman, Weezy F Baby explains that he does not like to be touched by people who he tells not to touch him. He also added he is going to get straight out of the building, because if he touches the cameraman back, he would be going straight back to jail.

“I don’t like to be touched by people I don’t tell to touch me. So I’m gonna get out of the building, because if I touch somebody I go to jail.”

“They not the same color I am, so you know how that go. But to them – fuck you!”

After the game had finished, Weezy F Baby got into an argument with a cameraman and had to be pulled away from him by his teammate Desmond Howard.

You can view a short clip of Tunechi telling the cameraman to “look at me when you apologize” after the jump below, as well as a photo of them both arguing.