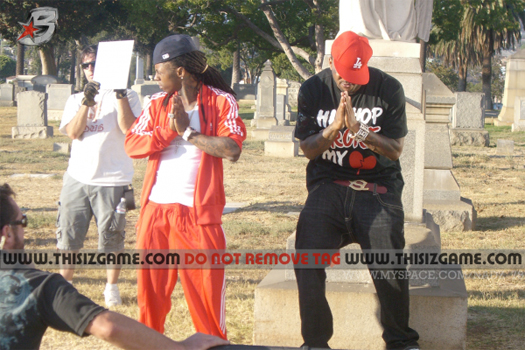 END_OF_DOCUMENT_TOKEN_TO_BE_REPLACED

“I flaked on the video,” Game said of the track, which features Lil Wayne and Birdman. “Bird was like, ‘Listen, daddy, you can come down here. Junior is gonna turn himself in next Wednesday. You can come down here. We can shoot the video before Junior go in. You just have that in the safe.’ I blew it. I didn’t make it down. Once he went to jail, I was like, ‘I can’t use this.’ I didn’t want to save it, so I gave it away. That was like, ‘Single!’ ”

So what was so important that he couldn’t make it to Miami for his own video? He was finishing up tracks with the most successful hip-hop producer in the world.

“I think I was in with Dr. Dre. I couldn’t move,” he thought back. “I think we was finishing up his records. When Dre is mixing, you don’t leave. You gotta stay posted. But I couldn’t move. So I gave it away. Fans appreciate it, though.” – MTV

And in more news, Eminem spoke to Skyrock Radio in Paris over the weekend and mentioned Tunechi: “I’ve always respected what Wayne does, and Lil Wayne, to me, is definitely one of the greatest in the game right now”. I think we can all agree with what Shady said.

Here is the tagless joint from Game‘s The Red Room mixtape featuring Lil Wayne and Birdman. The track is called “Everything Red“, and we previous posted this song here with DJ Skee tags. Ryan Leslie produced this record, which you can listen and download below:

In an interview with AllHipHop.com, Game says that Lil Wayne‘s No Ceilings mixtape was too good and he killed everybody with it! Game also speaks about how he got Weezy and Birdman on his mixtape for this record.

Game and DJ Skee recently released their The Red Room mixtape, and on that tape is a track with Lil Wayne and Birdman. The title of the song is “Everything Red“, and is unfortunately tagged up. You can stream/download the record below, and let’s hope we get the tagless version soon.