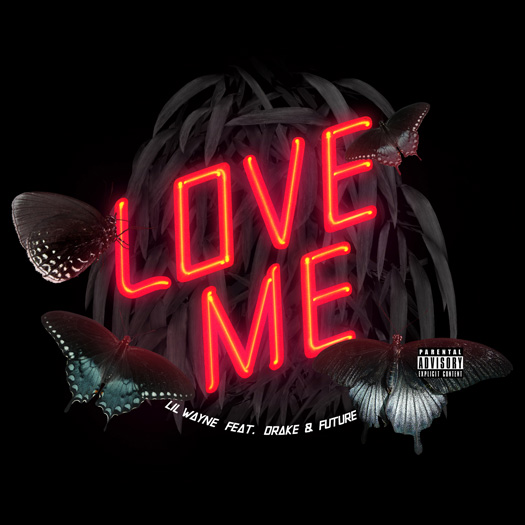 According to Chart News, Lil Wayne‘s “Bitches Love Me” single featuring Future and Drake off his I Am Not A Human Being II album has reached Platinum status. This means that the song has sold over 1 million copies in digital sales since it was first released on January 18th, 2013.

Click here to watch the music video for “Bitches Love Me” and here to read the lyrics. Congratulations to Tune once again on another great achievement ❗

According to Billboard, Lil Wayne‘s latest single featuring Future and Drake, “Love Me“, has moved up to the #10 spot on the Hot 100 chart.

This makes it Weezy F Baby‘s 18th song that has been in the Hot 100 top 10 list, tying him in second place with Ludacris for the most top 10 tracks among rappers. Jay-Z leads the list with 19 songs, so I’m sure Wayne will overtake him in no time.

“Love Me” also marks Future‘s first top 10 track in Billboard’s Hot 100 chart, so a congratulations goes to him, Tune and Drizzy on their accomplishment!

Here is the official music video for Lil Wayne‘s “Bitches Love Me” single featuring Future and Drake. The visual, which was directed by Hannah Lux Davis, was shot in Los Angeles, California at the end of January.

You will be able to find this Mike-Will-produced song on Weezy F Baby‘s upcoming album, I Am Not A Human Being II, due to drop on March 26th.

Lil Wayne Talks Concept Of “Love Me” Video, On Set With Future & Drake

We saw a teaser yesterday, now here is a new video of Lil Wayne, Future and Drake all on set of the “Bitches Love Me” video shoot in Los Angeles. Also in the clip, Weezy F Baby talks to MTV about the concept of the visual and how the single came together.

“I just got out of a bedroom full of water and three women. The water was cold and they were all over me and I had my shirt off so I’ll probably have pneumonia by the end of this interview, but it’s all good. I ain’t trippin’.”

“The concept of the video is really just to create awesome scenery. A scenery that every man… anyone wanna be in. I appreciate Drake and Future for doin’ this because I’m quite sure they’re hella busy like I am, but I ain’t never too busy to get in a bed with three women, with water everywhere.”

“I think Future gave me that song with the hook on it already if I ain’t mistaken. I just put some words to it and put it out and gave it a shot. I hoped people liked it and they did so here we go.”

The official music video will premiere tomorrow morning at 6AM EST on all MTV channels.