Lil Wayne Goes Skating In His House & On His Roof [Video] 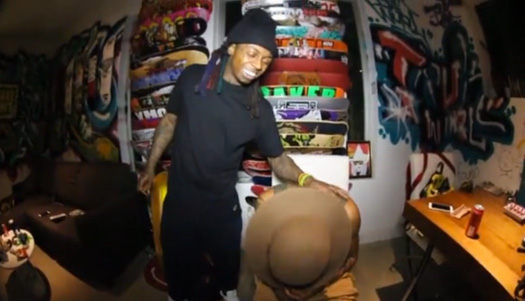 Similar to last night how Lil Wayne tweeted out a video of him skateboarding in the studio, Wayne has done the same today, but this time it’s a clip of him skating at his house.

Weezy can be seen showing off his skateboarding skills on his roof and inside his crib, but unlike last night, we don’t hear any new music being played in the background.

You can check out the new footage of Tunechi skating after the jump below! The password to watch the video if it says it’s private is “tune“.

END_OF_DOCUMENT_TOKEN_TO_BE_REPLACED

5Boro professional skater Willy Akers takes Lil Wayne‘s “strip club loot” after he dropped in off the roof of Wayne‘s Miami crib onto a skating ramp. You can watch the drop in above and if you didn’t already know, Weezy recently got the 5Boro logo tattooed on his face.

In related news, Tune spoke to VIBE about his new TRUKFIT clothing line and what inspired him to come up with the designs. Read the short interview below:

END_OF_DOCUMENT_TOKEN_TO_BE_REPLACED

“I’m probably on my skateboard tryna learn a new trick”

In the video above, you can watch some footage of Lil Wayne skateboarding on the roof of his Miami crib, which one of his homies filmed.

Now before some of you start moaning in the comments section saying: “this ain’t news“, I’m posting this for the people who don’t have Twitter. This is very rare to see from Weezy, as he never normally uploads any videos of himself and as you can see in the video, he is improving at skateboarding a lot!

Oh and if anyone didn’t notice, it says “Dhea” on his skateboard 8)

This 30 minute video is a must watch for everyone! Lil Wayne gets deep and personal talking about Steve Jobs’ death, why he drank syrup, why he tattooed his whole body, why he bought a Bugatti, why he learned how to play a guitar and put out a rock album, and why he learned how to skateboard. Tune also shows us a little bit of his mansion, starts to skateboard on his roof, and tells us about how he was considered a “Chief Blood” in Rikers Island.

I think we can all agree that this is rare from Weezy and we don’t normally get anything like this from him, but hopefully Wayne will carry on releasing these vlogs for us.

Derick G captured some footage of Lil Wayne skating, BMXing, go karting and playing basketball at Fantasy Factory in Los Angeles with Drama, Mack Maine, Lil Chuckee, Lil Twist, Dhea, Lil Za, Bigman and Fukus two months ago, which you can watch in the video above. Weezy also shows us a photo of a skating ramp getting built on the roof of his house in Miami. You can view some photos from the same day here!

Tunechi will be touring South Africa at the end of this year by bringing his “I Am Still Music” tour to Bellville, Johannesburg and Durban. Hit the jump to read more info: