Lil Wayne‘s best friend and manager, Cortez Bryant, recently sat down with Elliott Wilson and Brian “B.Dot” Miller for a brilliant interview on episode 79 of their “Rap Radar” podcast.

Tez Poe gave away plenty of unknown information about Weezy, what happened with the release of Tha Carter V, the situation with the Cash Money lawsuit, relationships with Birdman and Slim, and so much more.

You can listen to the full 85-minute conversation, watch excerpts of it, and see notes of what Cortez talks about all after the jump below. Enjoy!

END_OF_DOCUMENT_TOKEN_TO_BE_REPLACED 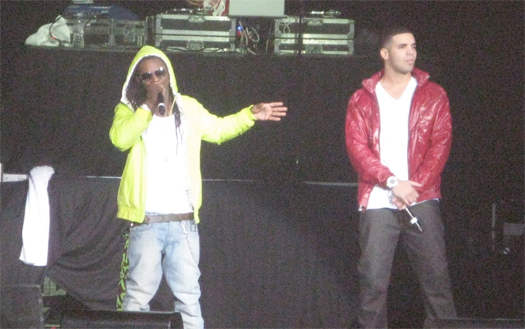 Here is the first leak from The Empire’s The Drought Is Over 7 mixtape and it’s called “Right Above It“. This is only a snippet, but the full version should be be dropping next week. Lil Wayne‘s verse sounds fire and Drake is rapping the freestyle he did here. You can download the snippet below which has way to many tags.

Director David Rousseau told MTV News that the Cash Money superstar recorded up to nine videos in one weekend, though most were in front of a green screen so his image could be added later to the finished clips. One video the rapper was on the set for, however, was his upcoming clip with Eminem for “Drop the World“.

The collaboration between the two esteemed MCs is the next single from Wayne‘s Rebirth album. The pair performed a snippet of the track at last month’s Grammy Awards.

Chris Robinson directed the “Drop the World” video and told MTV News on Tuesday (February 23) that the shoot — featuring the two heavyweight MCs — was comparable to a movie set.

“As a director, it’s how do you, more than anything, combine these two artists together and create something that’s special,” he explained. “Because when you have two artists together, it’s like, ‘Oh, they’ll stand next to each other [and that’s it].’ It’s very awkward sometimes to have two very big stars. How are you gonna cover that? Especially two artists that are so big. You can do that with a performance at the Grammys, because the spectacle is to watch them onstage and sit in the audience and look at it. But as an artistic piece to have some magic, or if it’s a mood piece or whatever way you communicate the music, you have to take two people into consideration with how you do that. And for me, I almost take it like a feature film: How did Scorsese put Jack Nicholson and Leonardo DiCaprio in the same movie?”

The clip was filmed on the eve of the Grammys, Robinson said. It was a one-day shoot, and Wayne was on the set for upward of 14 hours. As of press time, no details regarding the premiere are available.

The “Drop the World” video is still being edited, Robinson said. It’s likely the director will complete the final clip by the top of next week.

Robinson wouldn’t reveal the premise of the video, but he promised the clip would match the song’s intensity.

“You got two guys who are basically huge supernovas coming together, and the way that the song is constructed is great,” he said. “Because unless you see it coming, you don’t know Eminem is on the track. The first two hooks and the first two verses are all Wayne, and it’s kind of a surprise when Eminem comes through, and we matched it visually how Eminem enters the piece. From the concept and to just hearing the lyrics, with both of these amazing lyricists killing it, the whole video is just energy.”

Via MTV, and I’m really looking forward to watching this music video, because it was easily one of the best songs on the Rebirth album!

In other news, it looks like The Empire is actually going to go through with releasing The Drought Is Over 7, and Justin Bieber wants to work with Weezy F Baby once he comes out of jail:

END_OF_DOCUMENT_TOKEN_TO_BE_REPLACED

Lil Wayne – The Drought Is Over 7 [Mixtape Cover] 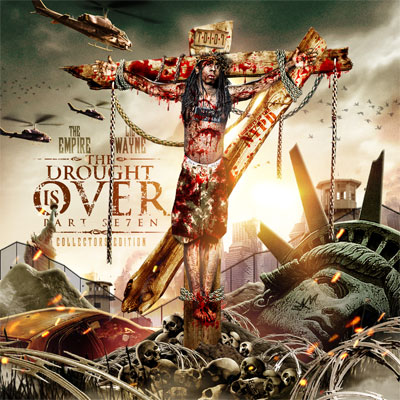 The Empire‘s and Lil Wayne‘s “The Drought Is Over 7” mixtape still has no release date and no tracklist, but we do now have the artwork! Leave a comment with your views on it. Me personally, I’m not feeling the cover, and supposedly we will get a new Lil Wayne track tomorrow.

This joint was on The Empire’s The Drought Is Over 6 mixtape titled Put Me In The Game, but we now have it tagless courtesy of Team Supreme. The official name of this Lil Wayne record is “Madden 08“, and you can download it below:

Also, Lil Wayne‘s “No Ceilings” mixtape is officially set to drop October 31st (Halloween), but it may leak earlier, who knows…

Update: We also have another no DJ Weezy joint called “Wayne’s World” which leaked a while back with tags on titled Young Money World. You can listen and download it below:

Update 2: Buck just released another no DJ Wayne joint called “Face Off (Remix)” which leaked nearly a year back with tags on titled Santa Clause. It is a verse for the Bow Wow and Omarion “Face Off” track and you can listen and download it below:

Update 3: And we have more new Weezy F Baby. This time it is the full no DJ Lil Wayne song called “I’m The Truth” which features Brisco and Shanell from Young Money. You can listen and download the track below: