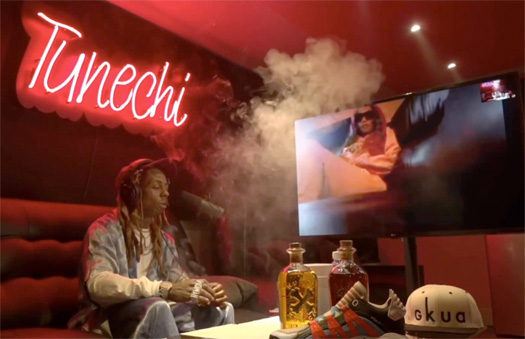 END_OF_DOCUMENT_TOKEN_TO_BE_REPLACED

Earlier this week, Lil Wayne hit up the Hit Factory recording studio in Miami, Florida with Birdman and Yo Gotti to work on new music.

Cash Money affiliate Hot Beezo shared the picture above and the picture below on his social media pages with a caption saying “CARTER 5 KOMIN SOON YA LIL BISHHH”.

This recording session took place after the Birdman speech at LIV nightclub on Sunday, so it does look like Weezy and Baby have really made up. When are we getting CV?

END_OF_DOCUMENT_TOKEN_TO_BE_REPLACED

For Lil Wayne‘s 30th birthday, his Young Money artist Nicki Minaj bought him a very special present worth $70,000. The gift is a 3-wheeled T-REX 14R sports car, which has “YMCMB” and “Nicki Loves Tunechi” transcribed on the vehicle’s rear and side, as well as “Tunechi” embroidered on the seats.

You can watch a video of Nicki surprising Weezy with the gift at his private birthday party in Hollywood above and view a closer look at the cyclecar in a photo below!