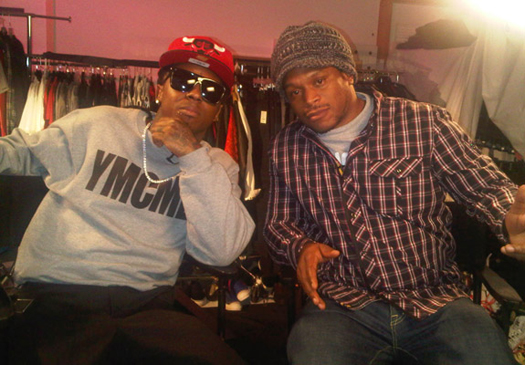 Lil Wayne and Cory Gunz shot a music video for Weezy‘s first single off his upcoming Tha Carter IV album, “6 Foot, 7 Foot“, earlier this week. The video shoot took place at an undisclosed location in Miami, and there are rumors that the video will premiere on February 1. If you want to purchase the grey YMCMB sweater Tune is wearing in the photo above, then you can do so here, and you can view 3 more pics after the jump below!

END_OF_DOCUMENT_TOKEN_TO_BE_REPLACED

In the video above, Lil Wayne wishes us the fans a Merry Christmas and says: “I hope you get every single thing you want. I got what I want and that’s y’all“.

Everyone at LilWayneHQ would like to wish all of our visitors a Merry Christmas too, and we hope that you are all enjoying your holiday 🙂

As a bonus, you can download the CDQ version of Weezy‘s “RappaPomPom” track that leaked unfinished in 2007. The song was produced by STREETRUNNER and features Junior Reid. 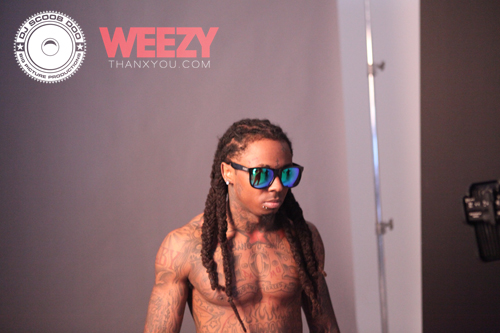 Tunechi left a message earlier on WTY talking about his performance on Saturday Night Live and his upcoming Rolling Stone cover. Weezy also thanks us the fans for making his C4 single, “6 Foot, 7 Foot“, #1 on the iTunes charts.

Hello World & Fellow Martians! I hope you enjoyed my Saturday Night Live performance. I can’t describe what it felt like being back in my element. I wanted to share some behind the scenes photos from my Rolling Stone photo shoot. The shoot was in Miami two weeks ago and just being able to do this type of stuff again is therapeutic. Be sure to pick up the issue when it hits stands. Thank you to the people at Rolling Stone for the opportunity.

In other news, we can be looking forward to Lil Wayne and his Young Money fam performing at BET’s 106 & Park New Year’s Eve Special, and being featured on Chris Brown’s upcoming “Look At Me Now” single, also featuring Busta Rhymes.

END_OF_DOCUMENT_TOKEN_TO_BE_REPLACED 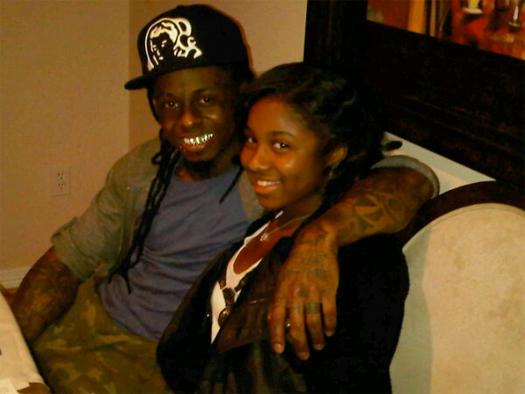 Lil Wayne left a brief letter on WTY yesterday wishing us the fans a happy Thanksgiving. Weezy spent his holiday in New Orleans with his family eating lots of food and watching lots of football. You can read his message below.

Hello world. I hope everyone had a great Thanksgiving filled with all the food and football you could handle. Mine was great for two reasons. I spent it in New Orleans and I spent it around family.

Enjoy this holiday season. Cherish these moments with your family. I love you all.

P.S. What are you thankful for?

After the jump, you can see a few pictures of Lil Wayne at DJ Khaled‘s birthday bash from last Wednesday at King Of Diamonds. Also, you can watch some more footage of Tunechi performing at the party, and he even performs “Bill Gates” at the end of the video.

END_OF_DOCUMENT_TOKEN_TO_BE_REPLACED

Lil Wayne is a man of many words when it comes to his rhymes, but the superstar MC was short and to the point when describing how he’s moving on past his experience in prison the past eight months.

“I forgot about yesterday,” Wayne told MTV News exclusively on the red carpet of his “Welcome Home Tunechi” party in downtown Miami on Sunday night (November 7).

The night before, on Saturday, Wayne surprised fans and Drake by appearing on stage next to his protege during Drake’s last tour stop in Las Vegas for his Light Dreams and Nightmares jaunt.

Sway speaks to Lil Wayne and Birdman on the red carpet of Wayne‘s “Welcome Home Tunechi” party last night. Weezy thanks his fans and family, speaks on his performance with Drake in Las Vegas, says he has already “forgot about yesterday” when asked about moving on from his last 8 months behind bars, and Birdman speaks on their next business plans. After the jump, you can also watch another video of Tune thanking his fans for all our support.