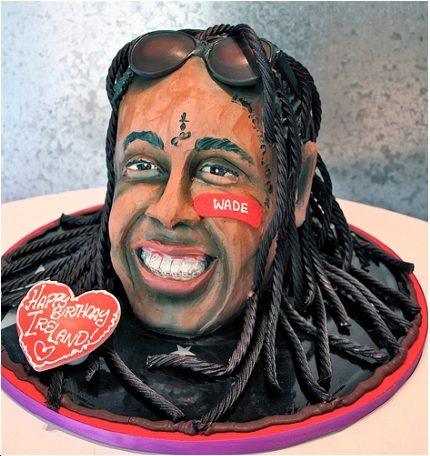 So, yes. This is a real cake, made by a real bakery in Beverly Hills. And yes, it was created for a famous person. Alec Baldwin and Kim Basinger’s daughter, to be exact. Licorice dreads! Those eyebrows! What part of his face would you even eat first?? I ask you.

Props Idolator, and hit the jump to read about Shakira replacing Flo Rida for Lil Wayne on her album and Weezy partying it up with Nelly in Miami.

Lil Wayne Replaces Flo Rida on Shakira’s “Give It Up to Me” Single:

Timbaland was originally supposed to rap on the track until Flo Rida replaced him. Then Lil Wayne came into the picture. “Everyone’s breath was taken away when Lil Wayne said he wanted to jump on the record,” said Amanda Ghost, the head of Shakira’s label Epic Records.

The rapper and Colombian bombshell only met once before briefly when they landed at an airport in the Bahamas at the same time. “This is the modern approach to things, with so little time and so much going on,” Shakira told the magazine. “I guess I’ll see him when we shoot the video.” (Rap-Up)

Lil Wayne is enjoying his freedom before he starts a jail term for possessing an illegal gun. The rap superstar — who pleaded guilty last week to possessing a .40-caliber semi-automatic cops found in a Louis Vuitton bag on his tour bus outside the Beacon Theatre — was spotted at Miami hot spot Liv on Sunday night. A spy said Wayne was living it up alongside rapper Nelly and added, “They were with a big group of women and stayed until 4 a.m.” Wayne needs to get all his partying done before February’s sentencing, when he’s expected to be handed a year in jail. (NY Post)