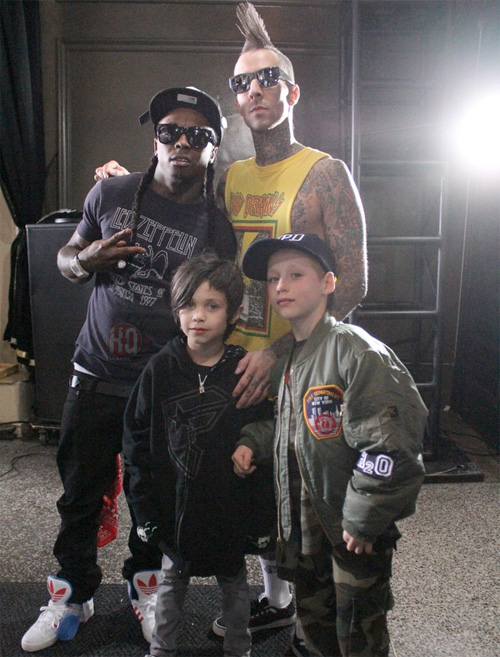 Travis Barker recently chopped it up with MusicRadar to speak on his upcoming solo studio album, which you can read below.

During their interview, Barker mentioned that he is 70 percent done with his new project and it will feature Lil Wayne on it, as well as plenty of other rappers.

The Blink-182 drummer also talked about learning from his studio sessions with rappers such as Wayne. These two last worked together on “Can A Drummer Get Some” in 2011!

You mentioned hip hop and marching just then, how much of an impact have those influences had on your work with Blink?
“They have both had a big influence. When it comes to fill ideas or even sticking patterns, just being able to lead with my left is important or being able to incorporate flams and stuff like that; all of that stuff I feel like has really helped me sound a little more like myself.

“That includes hip hop and every genre of music that I have played, from my stuff with Steve Aoki or my studio sessions with people like Lil Wayne or Playboi Carti, all of that shapes you as a drummer. I will learn something from every musical session that I do, I’m always learning.”

What is the state of play on your new solo album?
“I am 70 percent done with my new solo album. The next part, the most important piece, is for me to go play drums on it now. We’ve got the programming, I’ve made all of the beats, the second step was to get all of the artists and find out which artists sound great on which beats. The third step is me playing drums on it, mixing it and then putting it out.”

Can you share details of any of the guests on the record?
“I can mention some of the guests. I have Lil Wayne, Young Jeezy, Run The Jewels, Wiz Khalifa, Kendrick, Jay 305, YG, Anderson Paak, The Game, Problem…I have a lot of guests! I have a lot and I am still writing right now.”