In a recent Twitter Spaces conversation, Juelz Santana gave Lil Wayne his flowers, and put a stop to anyone who believes Wayne copied his and Dipset‘s style.

From personally seeing comments on social media that said Tunechi had bit The Diplomats‘ style, Juelz shut down these claims by saying Tune did what he had to do to become “the best rapper in the world”, which is by studying the game.

“You know, especially these blogs and sh*t, they try to separate or try to throw salt in the game. They love to hit me with the ‘Oh, Wayne took all this from you.’ I be like, man, Wayne is a student of the game just like we’ve all been students of the game. So Wayne did exactly what he was supposed to do. Wayne studied every artist… and he took what he needed to take, and he incorporated it into his style and what he needed to do, and became the best artist that he needed to be for his self.”

The Harlem rapper also added that they “all took sh*t from each other”, as well as called Weezy his “brother”. You can listen to Santana make these comments after the jump below! Do you agree with what was said?

END_OF_DOCUMENT_TOKEN_TO_BE_REPLACED 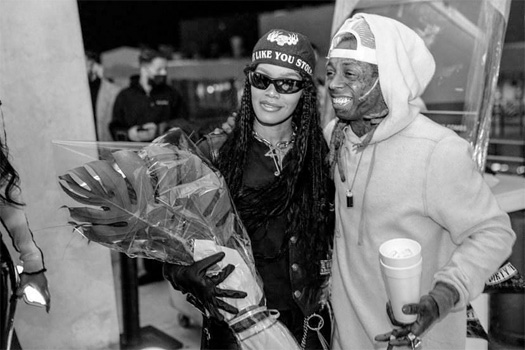 After previously sharing photos just under 2 weeks ago, we can now watch some footage of Lil Wayne at Teyana Taylor‘s “Dirty Thirty” birthday bash.

In the video, Tunechi can be seen gifting Teyana with a bunch of red roses, chopping it up with Diddy, and meeting Taylen Biggs for the first time.

You can check out a clip of Weezy at Taylor‘s birthday event, which took place at 1111 Lincoln Road parking garage in Miami Beach on December 9th, below.

END_OF_DOCUMENT_TOKEN_TO_BE_REPLACED

Above, you can watch some short footage from Lil Wayne‘s 29th birthday party at Club LIV in Miami. This party took place around 2 weeks ago, and Boo, Mack Maine, T@ and Troy Bless can be seen with Weezy.

In other Tunechi news, we can be expecting Ke$ha’s “Sleazy” official remix to drop soon featuring Wayne, Andre 3000, T.I. and Wiz Khalifa. Also, Weezy F Baby and Tip will be on Meek Mill’s “I’mma Boss” official remix, which is also expected to be released soon. Another single featuring Tune that is supposedly dropping soon as well is “Yao Ming” by David Banner. Oh, and Lil Twist’s “Flowers” single featuring Lil Wayne and Chris Brown could drop any day now too!