END_OF_DOCUMENT_TOKEN_TO_BE_REPLACED

There is a total of 18 songs on the project including “Tapout“, “Dreams Come True“, “Sunshine“, and “Fly Rich“. Out of the 18 tracks, Lil Wayne is featured on 6 of them.

You can view the full tracklist for Rich Gang: Flashy Lifestyle after the jump below. The album will be available in stores on July 23rd!

END_OF_DOCUMENT_TOKEN_TO_BE_REPLACED 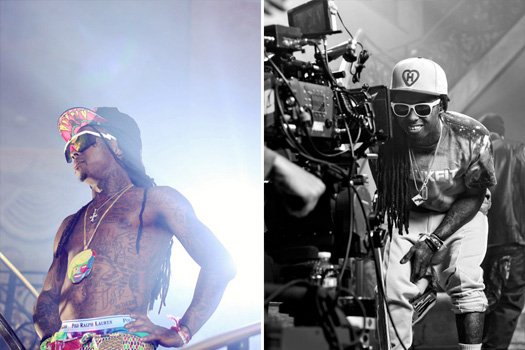 END_OF_DOCUMENT_TOKEN_TO_BE_REPLACED

Above, you can watch some footage of Lil Wayne at LIV Nightclub for “LIV on Sundays” on April 8th in South Beach, Miami. Weezy gave a speech about Nicki Minaj’s new Pink Friday: Roman Reloaded album and performed Gunplay’s “Rollin’” record. On stage with Tunechi was DJ Stevie J and Mack Maine, but Nicki Minaj, Birdman, Cortez Bryant, Mystikal, Fred Durst, Detail, Bobby V, Scaff Beezy and BP were all in the building! Check out pics from the party here.

Tune also announced to the people in the club: “I brought a nice young lady with me tonight, I hope she like me the way I like her”. If you want to see what the mystery woman looks like, then click here.

Hit the jump to watch some more footage of Wayne at LIV Nightclub on Sunday night, which includes his funny dancing, and him performing “Faded” and “I’m Goin’ In“.

END_OF_DOCUMENT_TOKEN_TO_BE_REPLACED

Behind The Scenes Of Mystikal, Lil Wayne & Birdman’s “Original” [Video]

In the video above, you can watch some behind the scenes footage from Mystikal, Lil Wayne and Birdman‘s “Original” video shoot that took place in Miami. Gil Green directed this visual, which includes cameos from Cash Money label-mates Mack Maine and Jay Sean.