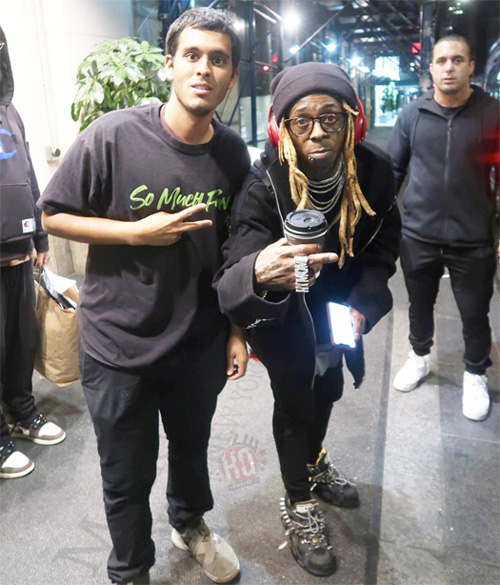 This STREETRUNNER and Sarom-co-produced track was originally recorded for Wayne‘s I Am Not A Human Being II album, but was left off the project for a currently unknown reason.

You can listen to the low quality version of “I’m Good” after the jump below, which includes lyric changes from the version that we heard with Meek Mill back in 2013!

END_OF_DOCUMENT_TOKEN_TO_BE_REPLACED

For this week’s “Feature Friday” installment, I have picked Fabolous‘ “Diamonds On My Damn Chain” aka “Diamonds” remix featuring a verse from Lil Wayne.

The original version of this Steve Morales and Sarom co-produced-song that features Young Jeezy instead of Weezy appears on Fab‘s fourth studio album, From Nothin’ To Somethin’, which dropped back in 2007.

“What that girl name? I call my jeweller up and tell him: ‘make that girl a chain’; I take that girl to Spain, she can’t pronounce a thang; And she got a girlfriend on the side like fangs; The fetish is Lil Wayne, I’m bombin’ like Hussein; Ma I’m that fire, now swallow my Butane”

You can listen to the “Diamonds On My Damn Chain” remix after the jump below!

END_OF_DOCUMENT_TOKEN_TO_BE_REPLACED

A new Lil Wayne song just surfaced online, which happens to be a leftover from the I Am Not A Human Being II album. The track is called “I’m Good” and features Maybach Music Group’s Meek Mill.

There are a few other Weezy F Baby records that were supposed to make I Am Not A Human Being II too, such as “Terrorists” featuring Cory Gunz and an untitled song featuring Flow, Kevin Gates and Gudda Gudda. But for some reason, none of these tracks made the final album.

You can listen to “I’m Good“, which was produced by STREETRUNNER and Sarom, after the jump below. You may also recognize Tune‘s third verse from his freestyle in Hawaii back in September, 2011.

END_OF_DOCUMENT_TOKEN_TO_BE_REPLACED

The first single from Lil Wayne‘s upcoming I Am Not A Human Being II album is now officially on iTunes. The song, which we have already heard, is called “My Homies Still” and features G.O.O.D. Music artist, Big Sean.

Weezy will be shooting a music video for this STREETRUNNER and Sarom-produced single, but there is no word yet on when he plans to premiere it. His forthcoming album also currently has no release date, but Wayne is looking to drop it at the end of this summer.