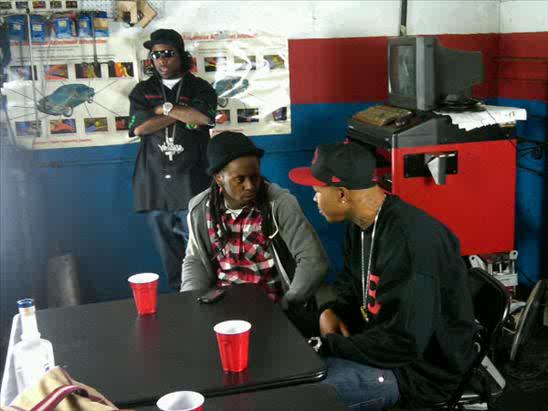 Compton Menace recently sat down for a one on one interview with E CEO from Boss Talk 101 podcast.

During their conversation, which you can watch below, Menace talked about why Lil Wayne is a “good dude”, having a relationship with Wayne before Birdman, and respecting both of them forever.

The Compton rapper also explained how the Tunechi feature on his “Blood N*ggaz” song came about from The Game always making him ask Tune for features, and so he decided to do it for himself. He even spoke about Weezy shooting the music video for it not long before he had to go to jail!

END_OF_DOCUMENT_TOKEN_TO_BE_REPLACED

Compton Menace sits down with the Digital Soapbox Network for an episode on their “Discourse” series that you can watch below.

From the 6:30 mark in their conversation, the Compton rapper and actor spoke about having a good relationship with Lil Wayne, their “Blood N*ggaz” single, and how Wayne is such a “good-hearted person”.

Later on in the interview, Menace talked about the very first time he met Tunechi, how he was always a fan of him, and signing to Cash Money Records. He also added that people stopped saying Weezy was a “fake blood” after the “Blood N*ggaz” collab came about!

END_OF_DOCUMENT_TOKEN_TO_BE_REPLACED

Mitchy Slick recently chopped it up with OakA for an interview that you can check out below.

During their conversation, Mitchy revealed how the “Blood N*ggaz” collaboration from himself, Lil Wayne and Compton Menace came about, which involved Menace doing a “gangsta favor” for Weezy by getting Tyga‘s Young Money chain back.

The San Diego rapper also confirmed he did not diss Tunechi in his “Blood N*ggaz” verse as it seems a lot of people thought that he was taking shots at Tune!

END_OF_DOCUMENT_TOKEN_TO_BE_REPLACED

Here is the tagless CD quality version of Menace‘s “Blood Niggaz” featuring Lil Wayne and Mitchy Slick. We already posted the song in late January with tags, and you can also watch the official music video for this record and view some photos from the video shoot here!

PS: Everyone keeps asking me why am I not posting up the new Lil Wayne snippet called “Age” which leaked last night… it’s because the full record is actually already out and was released in 2009. It’s a Natasha song titled “Sidekick Remix” and it features Weezy F Baby.

In other news, Young Money‘s “Roger That” and “Girl I Got You” music videos are being premiered on BET 106 & Park tonight! You can also watch a video below of a prison guard from New York’s Rikers Island prison breaking down what will be Wayne‘s daily routine while he is in jail:

END_OF_DOCUMENT_TOKEN_TO_BE_REPLACED

The visual, which was directed by TAYDOE, includes cameos from Tyga and Glasses Malone.

Below, you can also view plenty behind the scenes photos of Wayne from on set of the “Blood Niggaz” video shoot!