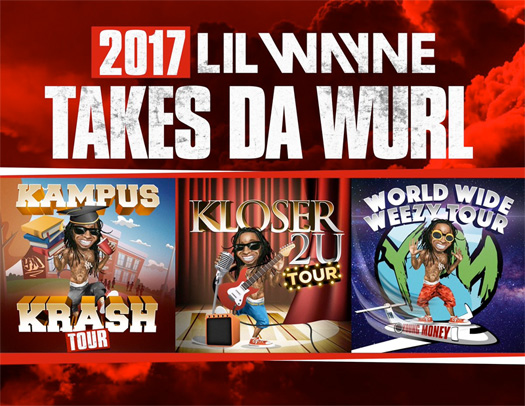 Lil Wayne has landed in the top 5 of Billboard’s 2012 Top Money Makers list! In 2011, Taylor Swift earned the most money with £37.5 million, while U2 came second earning $32.1 million, third place was Kenny Chesney with $29.8 million, fourth was Lady Gaga with $25.3 million and fifth spot belonged to Weezy earning $23.1 million.

Billboard have said that the music artists’ ranking were only based on the U.S. income sources from album sales, publishing royalties and tours, not sponsorships and merchandise sales. You can view the full top 40 list here, and the crazy thing is that Jay-Z didn’t even make the list 😮

END_OF_DOCUMENT_TOKEN_TO_BE_REPLACED

Here is a short snippet of a Lil Wayne verse over Gucci Mane’s and Nicki Minaj’s “A Failure” record. Nicki even says “I’m Minaj, that’s Gucci, that’s Wayne” on her verse here…

END_OF_DOCUMENT_TOKEN_TO_BE_REPLACED

The final numbers are in for Lil Wayne‘s 2008-2009 North American touring, and it looks like the rapper will have the highest grossing hip-hop tour of the year — and the most lucrative rap jaunt that Billboard has ever tracked.

“It’s definitely one of the biggest in the last couple of years,” Gee tells Billboard.com, noting that Haymon Events/Live Nation was the exclusive tour promoter for all of the shows. “Our plan was to prove that Wayne was a viable headlining arena artist.”

END_OF_DOCUMENT_TOKEN_TO_BE_REPLACED

Tonight’s Lil’ Wayne concert at GM Place has been cancelled at the last minute.

“The Lil’ Wayne show has been cancelled due to circumstances beyond Live Nation’s control,” the promoter said in a news release on Monday afternoon.

The American rapper last performed in Vancouver in January.

His Edmonton show, scheduled for Aug. 18, has also reportedly been cancelled.

Rumours are flying that rapper got caught up at the Canadian border, but this is purely speculation at this point.

This isn’t the first time Lil’ Wayne has had to cancel a concert in Canada. On June 29, 2008, it was announced that his show at Circa in Toronto and a scheduled appearance in Montreal were cancelled “due to unknown circumstances.”