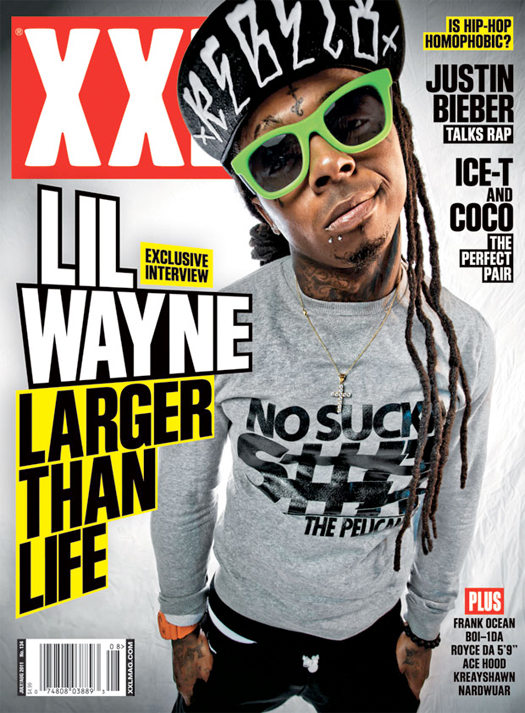 Lil Wayne graces the front cover of XXL Magazine‘s July/August 2011 issue, which will hit newsstands on July 12th. You can view the front cover above, and after the jump you can read some excerpts from the issue were Wayne speaks on Tha Carter IV, Drake, Nicki Minaj, Justin Timberlake, why he won’t record with Justin Bieber, and planning to retire in a couple of years 🙁

Writer Shaheem Reid, chopped it up with Weezy in Miami about how a rapper as prolific as himself, was able to actually select tracks for Tha Carter IV. Asked, when he knew that the album was ready, Wayne said: “You don’t. When they tell you. When manager Cortez Bryant call me and tell me and say, ‘You got such and such date is your deadline to stop,’ I be like, ‘Aight.’ ’Cause I never stop recording, obviously. So it’s just on him to say, “Okay, stop. We’re gonna pick these songs, and that’s the album.’ That’s how we do it.”

Fans might ask what fills the contents of such songs? Weezy explains: “What is good about me is that I’m an interesting muthafucka. I’m Dwayne Michael Carter period! Whether I’m a rapper or not, I’m interesting. And that’s what my album’s gonna be about: me and how interesting I am.”

Wayne saying being a good father to his children would be the cause for an retirement. “Honestly, this is the real truth,” he says. “I honestly think it’s unfair to my kids. I’m super dedicated into what I do. Like, it’s no questions—it’s hands down, I do this. I live this. I don’t have a day out my week that I do something else. I do this every day of my life, and I’m not about to stop, ’cause that’s the only way you can succeed in this business, is to do it the way I do it. I want to succeed the way I want to succeed. You can succeed. You can put out a hit… But to do it the way I want to do it, to be comfortable to do what the fuck I want to do, you’ve got to work like no other. Like I said, it’s unfair to my kids. So about 30, 31, 32, I gotta get ready.

Luckily for Wayne his superstar Young Money signees, Drake and Nicki Minaj, are sure to keep his pockets fat in his absence. In fact, Birdman, Jr. counts on it. “You already know what I expect,” Weezy says of Drizzy and Nick’s imminent success. “I expect to eat, and eat well. I expect Drake to be a lot more successful than he has ever been. I mean, this guy’s a superstar. He is the definition. That’s what I told y’all before he was: ‘That’s the definition of a superstar.’ And like Nicki, he’s only breaking ice. He has yet to be who he’s going to be. I’m banking on them.”

While fans can expect to hear both Heartbreak Drake and Ms. Minaj on Tha Carter IV, it’s the two Justin’s that Weezy F. also talks about. “That’s my little homie now,” Wayne says of The Biebs. “He texts me every night asking me to do his damn song. That’s my nigga, but I can’t do it. Like I said, I don’t want to fuck his shit up. But like I said, I want to work with Justin Timberlake. That boy got a voice; that boy can sing. He needs to come back right there on Tha Carter IV.”